Three Things Every Cyclist Should Know About Car Insurance 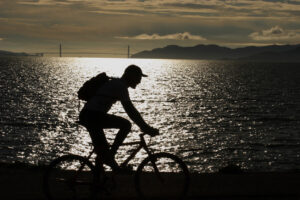 You’re a cyclist. You know that collisions can happen, but you have health insurance to pay your medical bills in case the nightmare scenario happens and you end up in the ER after a bike crash. Maybe you even have a Bay Area Bicycle Law business card in your wallet to help you get compensation from the driver’s insurance. So you’re all set, right?

Unfortunately, there are some cracks in the system that you can still end up falling through if you aren’t careful. Informing yourself about how car insurance works in a bike crash can help make sure you’re as prepared as possible.

1. The Minimum Auto Liability Policy Limit in California is Only $15,000

If you are hit by a car as a cyclist, an average driver’s liability policy limit might not be enough to completely cover your damages.

In California, the minimum liability policy limit is $15,000 — which is among the lowest requirements in the country. The driver’s liability policy is what will cover your medical bills, other economic damages, and pain and suffering if you’re hit while riding your bike.

The economic costs of bicycle accident cases can add up quick, even if you have good health insurance. Co-payments, deductibles, treatments like chiropractic visits that might not be covered by your health insurance, time off of work, and paying for extra help around the house, for instance, can add up to $15,000 faster than you might expect. If you’ve been seriously injured and require a hospital stay or surgery, your damages will likely surpass $15,000 on the day of the bike crash. This is not even taking into consideration noneconomic damages that you’re entitled to under California law, like pain and suffering, emotional distress, and loss of enjoyment of life.

Additionally, because of subrogation clauses in health insurance contracts, you will need to pay your health insurance back for any treatments they pay for related to the crash, if you get compensation from the driver’s or your own auto policy.

Raising the minimum liability in California would allow cyclists, and others, who are hurt by an at-fault driver to collect more money to cover skyrocketing medical bills and other damages.

Because California’s requirements for minimum liability policy limits are so low — and because about 16% of California drivers are uninsured, according to the Insurance Information Institute — it’s smart to reassess your uninsured/underinsured motorist (UIM) coverage.

If you happen to be hit on your bicycle by an uninsured or underinsured driver, your health insurance will be the first way to take care of medical bills (although you’ll be stuck with your copays and deductible). Bicycle damages may be covered under the driver’s renters or homeowner’s insurance, too, if they have that kind of coverage — although if they don’t have car insurance, they likely weren’t responsible enough to get renters or homeowner’s insurance either.

The second way to get compensation is through uninsured motorist coverage, which you should always opt in to if you have car insurance. This type of coverage is not only helpful in the event the driver doesn’t have insurance or successfully flees the scene of the crash, but also when they are considered “underinsured” — that is, their insurance policy limit is lower than the total of your damages. In these cases, UIM coverage provides compensation when the at-fault driver’s insurance is just not enough. So, even if a driver had a minimum liability policy of $15,000 and your medical bills came to $50,000, you could work with your own insurance provider to close the gap left by the driver’s low policy limit.

UIM coverage is through your own auto insurance — so if you don’t own a car, you unfortunately can’t get this coverage. If you do have a car, and also ride a bicycle, however, you should definitely double check your UIM coverage and make sure that your UIM policy limit is high enough to compensate you in a serious crash. We recommend at least $250,000 worth of coverage. California law dictates that insurance companies offer you this product and to decline, you are required to sign a waiver. However, insurance brokers don’t always do a good job explaining why it is so important.

We have seen time and time again clients kicking themselves for having declined UIM coverage after getting into a bicycle crash and finding out the driver was uninsured or underinsured. UIM coverage is pretty cheap, and can give you peace of mind knowing that you’ll have the resources to get back on your feet in case of a crash.

3. Even Your Own Insurance Company Is Adverse To You

Of course, being the most prepared cyclist in the world doesn’t protect you from the insurance company. Even if you are friendly with your insurance agent and believe he or she is looking out for you, it will be out of their control when you submit a claim. Your insurance agent might feel you deserve all that you are asking for, but it’s not up to them. It’s up to the claims department, which is a far-off, separate part of the insurance company.

The claims department’s goal is to get you to settle for as little money as possible so they can keep as much revenue as they can. There is no law requiring that they offer a reasonable or fair amount of money (except in the case of UIM coverage, where there are some rules to protect you).

A CNN investigation into State Farm and Allstate found that, with the help of a large consulting firm, these insurance companies developed a strategy in the 1990s to increase profits by taking a hard line in certain claims involving soft injuries. “The strategy, according to former Allstate and State Farm employee Jim Mathis, relies on the three D’s — denying a claim, delaying settlement of the claim and defending against the claim in court.”

If you’re injured in a bike accident, don’t make the mistake of assuming that an insurance company will be reasonable or fair to you. Contact a person injury lawyer with expertise in bicycle accidents, who has the skills and knowledge to handle communications with the insurance company, and who will actually advocate for your best interests. The bicycle lawyers at Bay Area Bicycle Law know all the tricks that insurance companies use to try to reduce settlements, and can help you avoid falling into insurance company traps.