This page will be periodically updated with the latest bicycle death statistics for bicycle-related crashes in California and across the USA.

On average, 751 cyclists die in fatal bicycle accidents each year in the United States (for years 2007 through 2019).

According to the Federal Highway Administration (FHWA). From 2007 to 2019, 9,768 cyclists have died across the U.S. We took that number and divided it by 13 to get the average.

2018 was the deadliest year for cyclists with 871 recorded deaths. Bike deaths appear to be on the rise overall. However, the number of fatalities dipped to 846 in 2019. 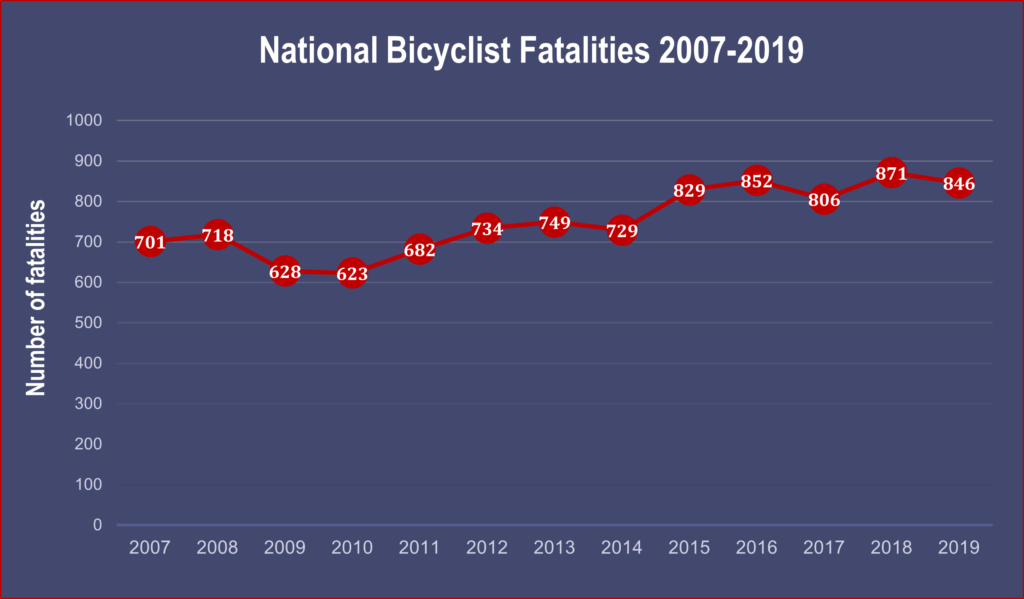 Between 2007 and 2019, 1,672 total cyclists have died on California streets. (FHWA) Over this time span, an average of about 129 people per year died in bicycle accidents in California. 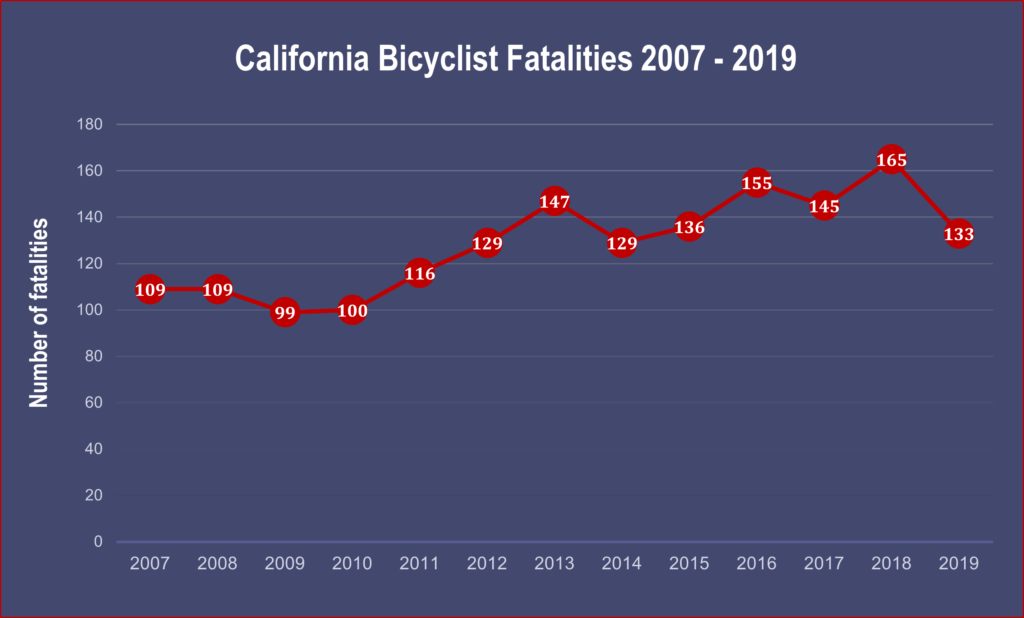 For individual counties in California, Los Angeles County leads all others in the state in bicycle fatalities. (TIMS) 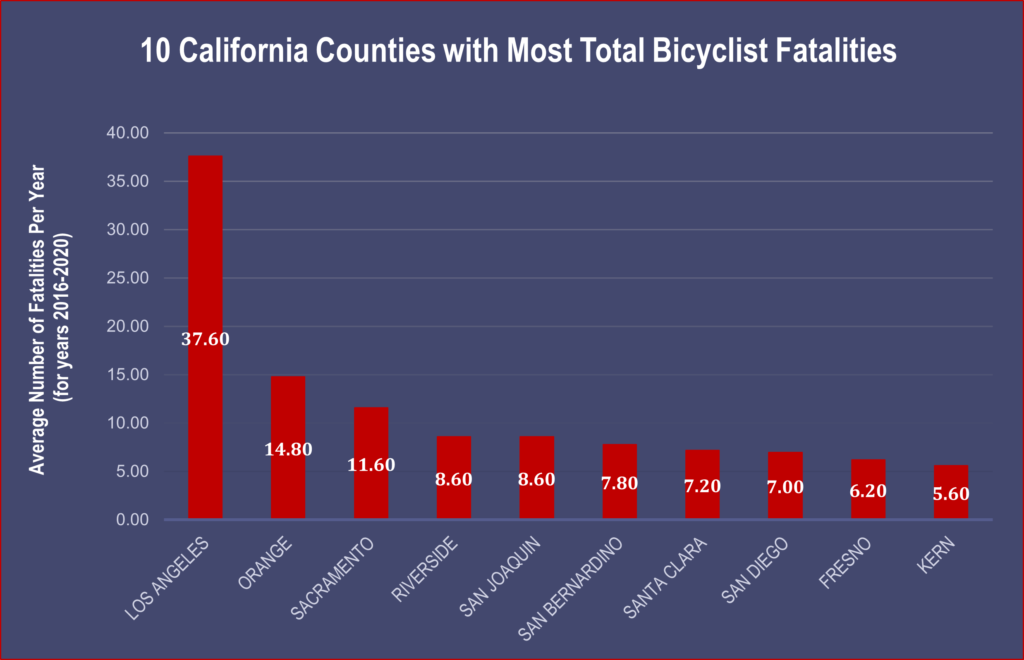 In 2017, Los Angeles was tied for 2nd with Phoenix for the American city with the highest bike death statistics.  They both reported 14 fatal accidents that year. New York City led the nation in fatalities with 22 in a year.

However, Los Angeles County is also by far the most populous county in California, meaning that there are just more cyclists on the road. Looking at the rate of fatalities per 100,000 people therefore gives a better idea of how dangerous a county is for bicyclists. (TIMS) 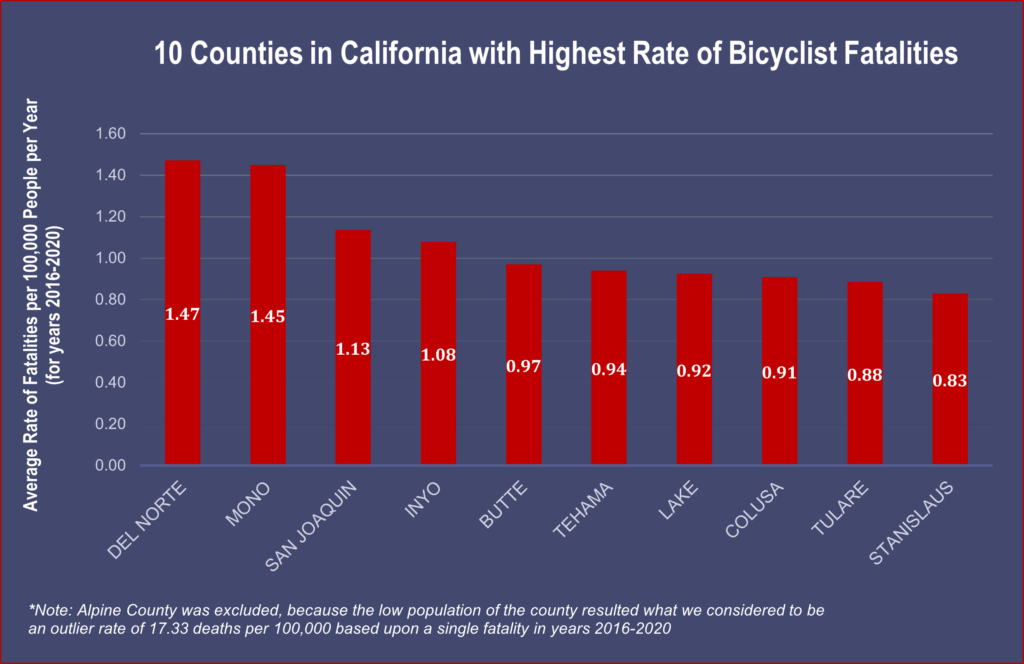 When looking at rates of bicyclist fatalities per 100,000 people (using 2018 population data), Los Angeles county isn’t even in the top 10.

The picture looks a little different when taking into account not just fatalities, but injuries as well. (TIMS) 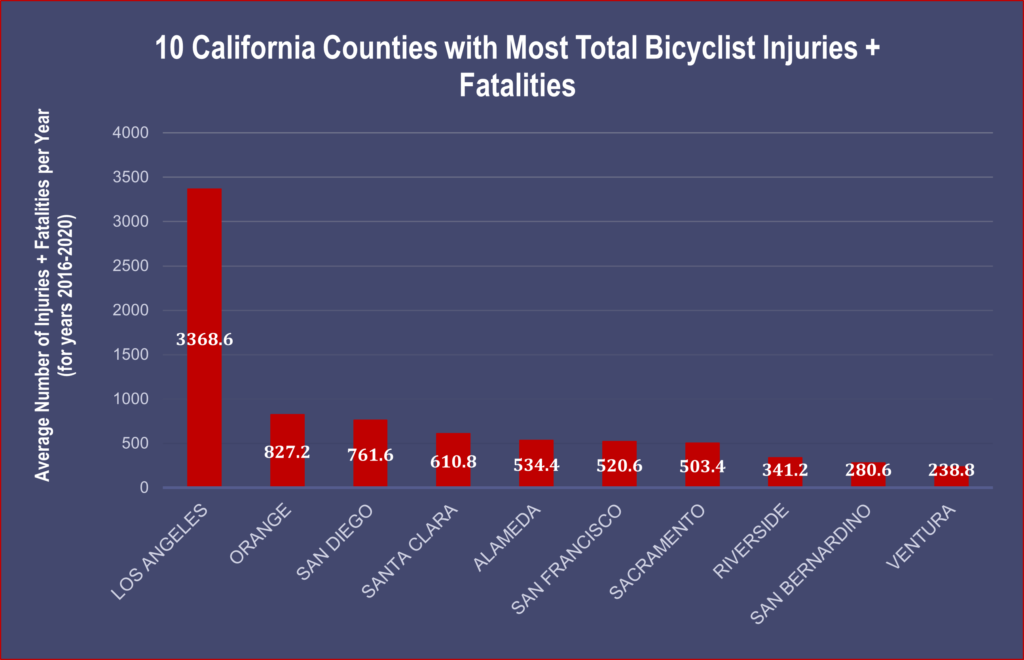 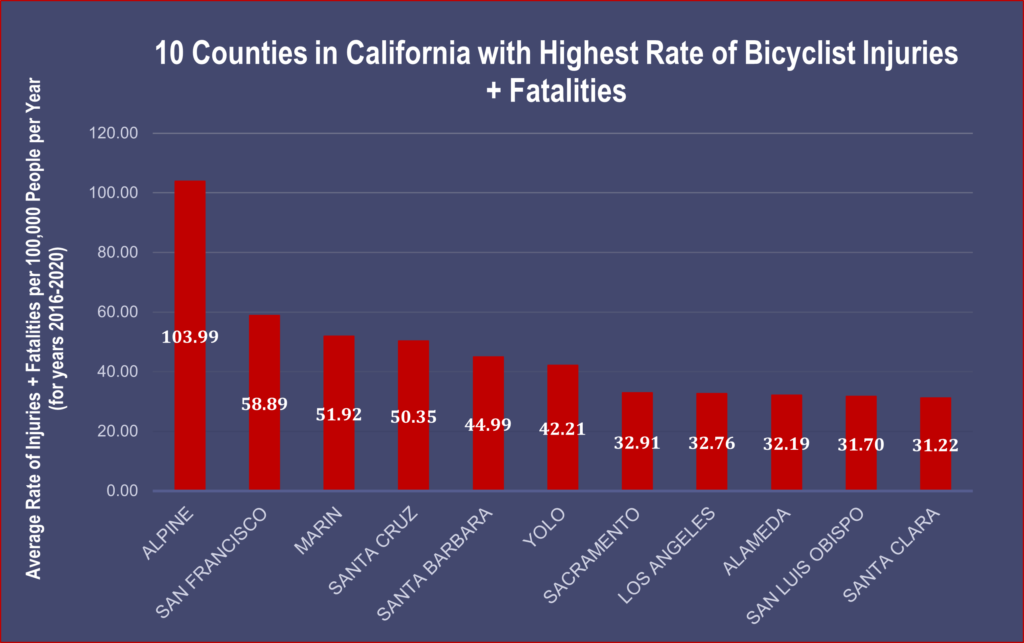 Bike Deaths Statistics According to Time of Day

The time of day cyclists ride, statistically, makes a big difference in how much risk they face. Rush hour is the most dangerous time to be on the roads for anyone, but for bicyclists, dusk and sundown can also be very hazardous.

These are the national findings on when the most accidents happen (NHTSA): 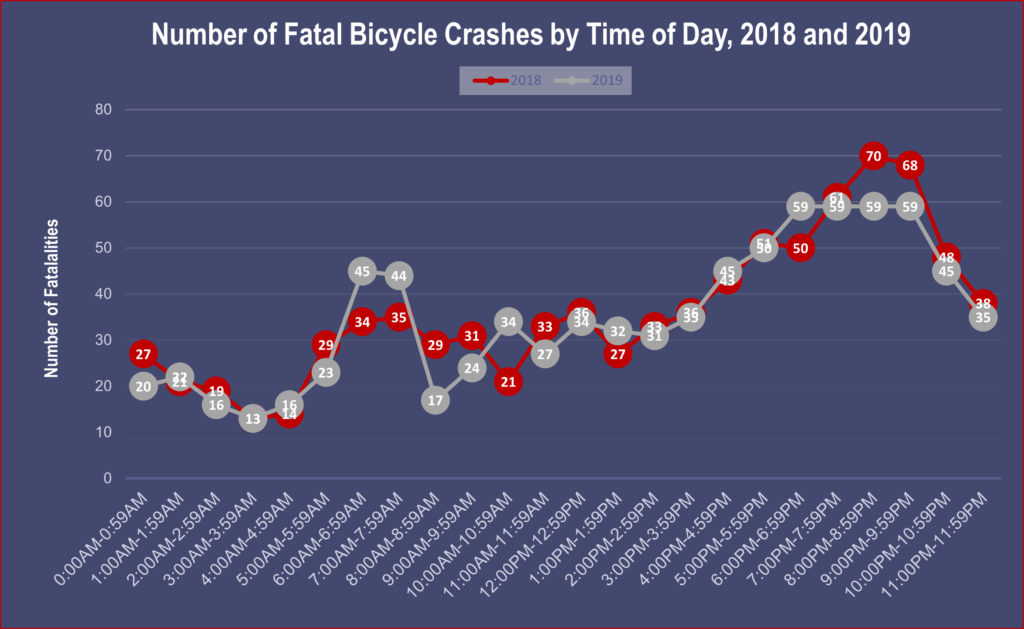 In California in 2019, 48% of bicycle accidents happened during daylight hours. 28% took place at night with street lights present, while 16%  were at night on roads where no streetlights were present. Accidents at dusk or dawn accounted for 7% of accidents. (CDPH) 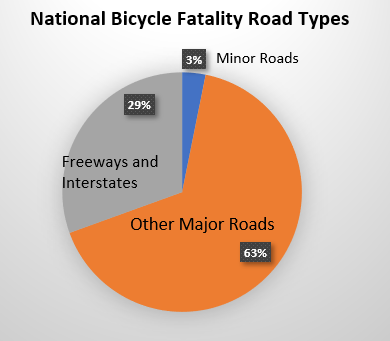 3% of bicycle fatalities happened on Interstates and Freeways.

63% happened on other major roads.

The age and gender of the cyclist is a significant factor in fatal bike accidents. Understanding the reason for the many differences might help in making the streets safer for cyclists.

In 2018 adult men died on bicycles much more than anyone else, nationally (IIHS). 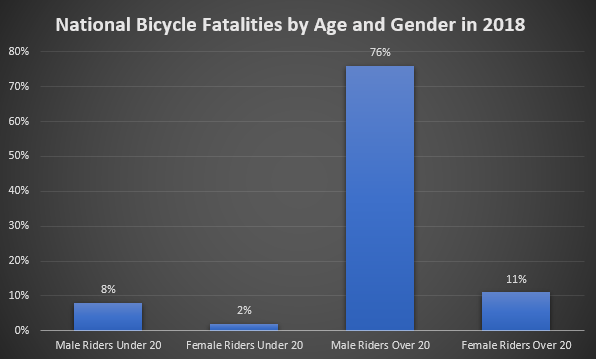 From 2016 through 2018 in California, nearly eight men lost their lives in bicycle accidents for every woman who died. According to census figures, California men are about twice as likely as women to commute to work by bike. (CaliforniaHealthline)

Bike death statistics in California of the ages of victims in fatal accidents in 2017 looked like this (CAL OTS): 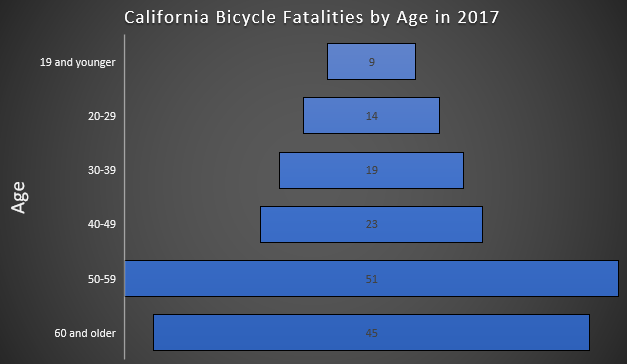 According to a report from the National Highway Traffic Safety Administration, in 2017 across the nation out of 782 cyclist deaths:

California law does not require riders to wear helmets once they turn 18. 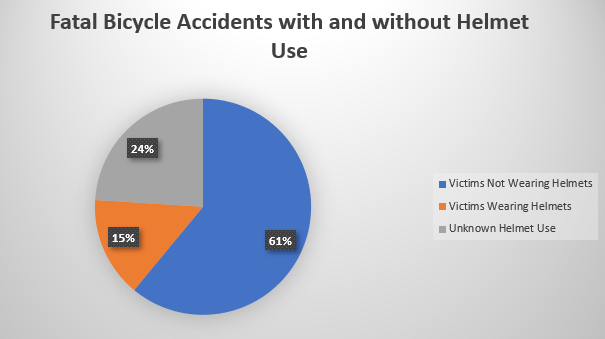 Nationwide, sixty-one percent of bicyclists killed in 2018 were not wearing helmets. Helmet use was unknown in 24% of incidents. (IIHS)

In 2018, nationwide there were 424,350 emergency department-treated injuries after bicycles and bicycle accessories related accidents (InjuryFacts). Cyclist deaths accounted for 2% of all motor-vehicle traffic fatalities.

The numbers only underline the dangers that many cyclists face on the streets every day. Hopefully, in looking at the injury and fatality statistics, one can map out a cycling strategy that can increase the odds of avoiding an accident.

Some things you can avoid and other things, like careless or distracted drivers, will always be threats at any time or place you ride. If you have been in a bicycle accident of any kind, please don’t be shy to contact on of our bicycle attorneys,  who will be able to help you navigate the aftermath of a serious crash.