Climate Change: The Role E-Bikes Could Play in the Cure 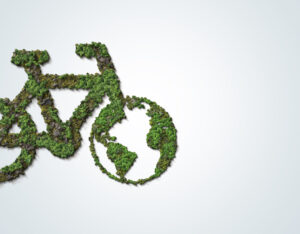 California has been a leader in reducing pollution, especially from vehicles, but policies focusing on cleaner gasoline, carpooling, and incentivizing the switch to electric cars aren’t effective enough to curb climate change in cities where urban sprawl has created long commutes. The best solution, many experts now say, may be electric bicycles.

E-bikes — bicycles equipped with motors to help you pedal — could make a dent in transportation-related CO2 emissions, according to a 2019 study from the Transportation Research and Education Center. If e-bike usage increased just 15% across the U.S., it would reduce those emissions by about 11%.

That would make a big difference here in the Bay Area, but also around the country.

Think about a normal week in transportation. Five or more commutes to work. A couple trips to the grocery store. Maybe dropping the kids off at school. How many times are you taking a car to only travel a short distance? It’s probably more than you realize, and even if it’s an electric car, you’re probably contributing to vehicle pollution, which continues to rise across the globe year-over-year (California’s tailpipe emissions have risen 5 percent since 2013).

A typical passenger vehicle emits about 4.6 metric tons of carbon dioxide per year, according to the Environmental Protection Agency. While it’s a lot more difficult to find the average pollution an electric vehicle emits, because different models operate a little differently, one thing is clear: e-bikes are very effective at saving energy while getting you around town.

Perhaps one of the biggest arguments in favor of making the switch to an e-bike, even if just part of the time, is also the simplest. Most Americans, especially those who live in populous cities, drive only short distances — distances that could easily be covered by a pedal-assisted bicycle (to the office, a local coffee shop, meeting friends for dinner, the grocery store, etc.) In fact, a Bureau of Transportation Statistics study found that up to 69% of car trips are only about two miles or less.

That’s less than what the average e-bike rider covers in a single trip. Data from e-bike retailer VanMoof estimates that the average distance covered per e-bike round trip US is 7.19 miles and the average ride time per round trip is about 45 minutes.

“Hopping into the car for these short trips to work, the playground, and the supermarket may not seem like a decision with a big impact, but all of those car miles add up,” writes environmental advocacy group Green America. “Cars emit the heat-trapping greenhouse gases that cause climate change, as well as pollutants such as nitrogen oxide, sulfur oxide, and ground-level ozone, which contribute to acid rain, smog, and health problems.”

Ditching a gas-guzzling vehicle for short commutes could be significant, especially here at home. The California Bicycle Coalition found that e-bikes are 10 to 30 times more efficient than electric cars at fighting climate change and get 30 to 100 times more miles per pound of battery than an electric car. Just imagine how much could change if more people opted to take those short trips with an extra climate-friendly mode of transportation.

How much pollution could e-bikes save the planet? It’s a complicated question, depending on how many people make the switch and how often. But one study in England found that e-bikes could cut transportation emissions by as much as 24.4 million metric tons of carbon dioxide per year.

Good For the Environment And So Much More

People For Bikes, an organization that encourages and emphasizes the role of bicycles in transportation, says increasing the use of e-bikes is also a winning strategy in other ways, too.

“Estimates show that active transportation infrastructure creates 17 jobs per $1 million dollars spent — more jobs than for other transportation projects, including roads,” the group writes. “That means we can create jobs for economic recovery while at the same time creating facilities that are, by their nature, green and sustainable, serving both practical and recreational needs.”

The California Bicycle Coalition also notes that e-bikes are extremely cost effective. Most bikes cost less than a penny per mile to charge, they say. That helps make the mode of transportation an even more enticing one for people who are often traveling short distances.

In all, it might be the cost savings that’s most tempting in making the switch, which would in turn do a lot of work for a planet in crisis.

The Future of E-Bikes

The good news is that e-bike usage continues to increase around the world.

A recent study in cyclist-friendly Germany found that e-bikes were the fastest growing mode of transportation, ahead of electric cars. And even in the U.S., where cars dominate roads in most parts of the country, there were nearly 790,000 electric bike imports in 2021, up about 70% from 2020, according to data collected by the Light Electric Vehicle Association.

“The pandemic gave us a boost and that boost resulted in a lot of people finding that electric bicycles have a valid use in their life,” LEVA founder Ed Benjamin told Bloomberg News. “And I think that’s now driving the sales.”

That signals a shift in what consumers are looking for, especially as gas prices surge. E-bike retailers all across the country are reporting increased interest and sales.

The increasing interest in e-bikes is apparent locally, too, with more infrastructure projects in the works.

The City of Oakland plans to use $1 million from a state grant to start an e-bike rental program that could make as many as 500 bikes available to residents.

“This project very much goes in line with our vision for a rapid equitable transition to a world powered by renewable energy that benefits everyone,” Edgar Arellano, who is working to launch the “e-bike library,” told a local news reporter.