Biking the Coast of California: 5 Paved Trails For Every Cyclist 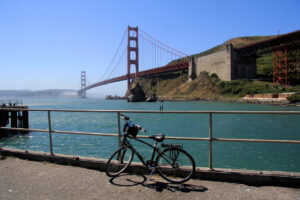 Biking the California Coast is a treat, not just because the state boasts 840 miles of coastline views, but because trails from San Diego all the way north feature everything there is to love about the Golden State: great food, shopping, and, of course, beaches. You’d be hard pressed not to find all of the above on these trails spanning the coast.

These five paved bike paths range in length, difficulty (some paths mix with traffic, making them more suitable for more advanced cyclists) and scenic views, from city skylines to quiet pebble beaches. Paved trails are great for new and seasoned riders alike. Whether it’s a morning workout or a leisurely whole day affair, make the experience what you want. Have you found yourself asking: “How do I find paved bicycle trails near me?” We’ve got you covered!

There’s a little something for everybody who wants to bike the California coast, so what are you waiting for?

Santa Barbara is called the American Riviera thanks to its rich culture, beautiful beaches and Spanish colonial architecture. The city also features plenty of bike trails that’ll have you feeling like you’re cycling through a different country completely.

Take a 32-mile ride from Santa Barbara to Ventura to fully enjoy the California coastline. You’ll travel through the beach towns of Montecito, Summerland and Mussel Shoals. To access this trail, start at Leadbetter Beach, which is located along Santa Barbara’s Waterfront. The path will take you toward Stearns Wharf and you’ll follow it along the ocean until turning inland for a bit and then eventually turning back to Butterfly Beach. Finally, ride over Highway 101 and you’ll soon arrive in Summerland — the views are stunning the entire way. From there, you’ll have to make a few turns before you’re riding along the ocean again and into Ventura. Find full directions on this ride here.

If you’re going to bike around Los Angeles, you’ll have some of the best views in the state, and this trail covers more beaches that you’d probably expect. The Marvin Braude Trail can easily be made a full day, with lots of shops and eateries along the way. Commonly referred to simply as “The Strand” by locals, this trail is quintessential Southern California.

Start ​​in Pacific Palisades and ride West (Will Rogers State Beach is a good place to hop on the trail, though you’ll find places to park and access throughout the 19.5 miles). You’ll eventually hit the Santa Monica Pier, then Venice Beach and end at Washington Boulevard. From there, pick up the trail again and travel to the beach in Playa del Rey. You’ll also hit Manhattan Beach, Hermosa Beach and end at Torrance Beach, where you’ll see the cliffs to Palos Verdes, along the trail.

More than half of the Bayshore Bikeway’s 24-mile circuit is car-free, making it an optimal way to see the sights in San Diego. You’ll start the ride when you dock at Coronado Ferry Landing (take the ferry from downtown across the bay). You’ll ride through Coronado, along the Silver Strand (there’s beach access here) and through Imperial Beach and Chula Vista, eventually arriving back downtown. It’s just the right mix between coast and city riding, plus you’ll get to see San Diego’s best tourist stops throughout the trip.

Along the way you’ll ride past the historic Hotel del Coronado Hotel, built in 1888. You’ll also see the U.S. Naval Amphibious Base, where Navy SEALs train, and the San Diego Bay National Wildlife Refuge, a nearly 4,000-acre wetland home to many endangered species and migratory birds.

The trail is mostly flat, though lengthy, making it great for leisurely riding.

The San Francisco Bay area has no shortage of pleasant trails along the coast, but one of the best urban scenic bike rides is the Wiggle Loop, which comes at approximately 19 miles. Unlike lots of trails throughout San Francisco, this one features far fewer hills than most cyclists here are used to — it was designed to follow the path of a historic stream bed. Elevation gain throughout the ride is about 1,100 feet.

On this trail, you’ll get the full San Francisco experience, hitting all the cultural and scenic highlights. There are also plenty of stops that can keep you busy all day: Market Street, The Golden Gate Bridge, Fisherman’s Wharf and so much more.

For a shorter ride (about 6 miles), start at Duboce Ave. at the top of the Mission District. The route will be well-marked and end at Golden Gate Park.

For a change of California coastal scenery, head up north, where you’ll find trails that wind through the Redwoods and along pebble-stoned beaches. The Crescent City Harbor Trail in Del Norte County is a quiet, low-key ride that takes riders off the California Coastal Trail for about six miles. Along the way you’ll find plenty of places to eat, shop and admire wildlife along the beach (a perennial colony of sea lions has taken up residence in the marina).

This ride is family-friendly and paved throughout. For kids that need a play break along this ride, plan to stop off at Beachfront Park, a castle-themed park with an impressive view of the ocean. This ride has something for the whole family, and while on the shorter side, it definitely covers all the bases.

To access: Start on the eastern side of Beach Front Park near Play Street. The trail will follow Howe Drive along Crescent Harbor and cross B Street, ending at South A Street, where the western trailhead is located.