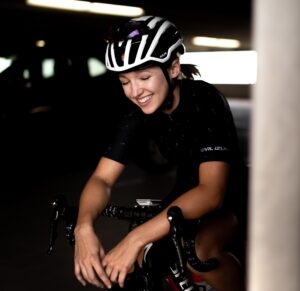 We have written in the past about why so many cyclists decide not to wear helmets, and why we recommend that everyone wear a helmet. Even though studies over the years have shown over and over that helmets reduce the severity of injury in a bicycle collision, a majority of cyclists choose to not consistently wear a helmet. In fact, just 29% of adult bicyclists report that they always wear a helmet.

So why do people choose not to wear a helmet? Our previous post covers this in more detail. But there are many reasons people don’t wear helmets, from feeling that they’re uncomfortable, to not wanting their hair to look bad for work. Or maybe its just one more thing to juggle in the morning on the way out the door – locating and putting on your helmet, pre-coffee (I’ve certainly been there).

And under California law, helmets are only required for cyclists under the age of 18. (Certain cities, such as Chico and El Cerrito, do require cyclists of all ages to wear helmets – so it is always a good idea to check your local laws). In 2015, a California state law was proposed to make helmets mandatory for cyclists of all ages, but the provision faced substantial opposition, including from bicycle coalitions, and didn’t become law.

Additionally, statistically, you are more likely to suffer a traumatic brain injury as a pedestrian or in a motor vehicle than as a cyclist.  So, some people argue that cyclists are not the ones who should be wearing helmets. Instead, motor vehicle drivers and passengers, and pedestrians should wear helmets!

What the studies show

Still, your brain is irreplaceable, and therefore we recommend that cyclists always wear helmets. Studies have consistently shown that helmets reduce injury severity, but new studies have come out since we last wrote about it.

A meta-analysis published in 2017 looked at the results of 40 studies, that collectively included data on over 64,000 cyclists injured in a collision or fall. The study concluded:

Another study published in 2017 concluded: “Despite potential weaknesses with case–control study designs, the best available evidence suggests that helmet use is an effective measure of reducing cycling head injury.”

In a 2019 study that looked at bicycle accidents that resulted in hospitalization for head or neck injuries, it was concluded once again that helmet use substantially reduced the severity of injury. The study looked at which demographics among riders were least likely to wear a helmet, and those most likely to suffer more severe head and neck injuries.

As legal advocates for cyclists, we also tend to look at the issue through the lens of bicycle injury cases. Preventing injury to your brain in the first place is the best reason to wear a helmet. But protecting your ability to get monetary damages to cover medical bills and other expenses after a bicycle accident is another good reason to wear one.

Even if you weren’t at fault at all for causing the crash, if you were not wearing a helmet, the driver’s car insurance company or attorney can argue that you are at fault for the extent of your damages related to your head injury, under California’s system of comparative fault.

That was exactly what Yellow Cab argued in a case we brought to trial against them. The driver had made an illegal u-turn while driving in San Francisco, and crashed into our client. Because our client was not wearing lights or a helmet, Yellow Cab argued that our client was 100% at fault. Although we conceded that not wearing lights after dark may have contributed to the crash (depending on whether the driver even looked before making the turn), we fought the allegation that our client was at fault for her injuries for failing to wear a helmet.

For instance, a plaintiff in a personal injury lawsuit is required to “mitigate their damages.” This is a legal principle that requires a plaintiff to take steps to improve their injuries after an accident. If they don’t, then they aren’t entitled to money for the fact that their injury didn’t get better. As an example, if a bicyclist breaks their arm in a crash, and then doesn’t go to the doctor, and the bone heals improperly so that the cyclist has a permanent disability, they won’t get money for the permanent disability – assuming that the bone would have healed if they had gone to the doctor. In that case, the cyclist failed to mitigate damages.

In some cases, the lawyer for the driver will argue that a cyclist not wearing a helmet failed to mitigate their damages. This is an improper application of this principle, however. Mitigation of damages only applies to what a plaintiff does after a crash. There is no requirement that a plaintiff preemptively mitigates damages before a bike crash even happens. A good bicycle crash lawyer will spot this dirty trick and fight back.

In order to get the best protection from a helmet, choosing the right one and the right fit matters. A 2018 study tested 10 different helmets, and looked at the difference in effectiveness in different models and designs of helmets. It concluded:

“The 10 bicycle helmets tested produced considerable differences in their protective capabilities under both real-world and standard-specified conditions on the CPSC rig. Risk of severe brain injury varied widely between helmets at the standard impact velocity, whereas the common, lower severity impacts produced PLAs associated with concussion.”

While you have to pay for full information on their recommendations, Consumer Reports tests different helmets for their effectiveness. You can even see how they test the helmets in the video below.

Consumer Reports notes that more expensive does not necessarily mean more safe, and that affordable safe options are available. A separate study published in 2021 looked at 9 different wholesale helmet models that ranged in price between $3.65 and $12.95 and found that the best performing of them was one priced at $6.45. Rather than a correlation between price and safety, the study found a correlation between helmet style and safety, with a multi-sport style being more protective than a bike style helmet.

Bay Area Bicycle Law is the only Northern California-based law firm to exclusively specialize in bike accidents. We always offer free, no-obligation consultations. And because we work for contingency fees — meaning a percentage of what we win for a client — our clients don’t owe us any attorney fees unless we get a settlement or verdict on their behalf. If you have been in a bike crash and are looking for a bicycle injury lawyer to represent you, or just have questions about how to proceed yourself, give us a call!