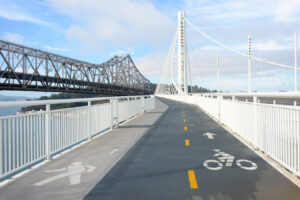 For those who like to travel by two wheels, California is a great place to be. This year, the state ranked fourth in the nation, and third in the region, for being a bicycle-friendly place by The League of American Cyclists, which started the ranking of states in 2008.

The league considers information that really matters to cyclists, like existing infrastructure, a state’s focus on creating more opportunities for cyclists and the amount of advocacy that exists for people who brave sometimes dangerous roads.

The thousands of miles of trails in some of the most scenic places in the country are just a bonus when it comes to cycling around California — the state truly shines at how it is increasingly prioritizing the mode of transportation.

In California, only about .87% of people commuting to work do so by bike (though in places like San Francisco, that’s much higher).

Still, many people in the region and beyond have cited safety among their top concerns about taking to the streets by bicycle — and that has resulted in an emphasis on implementing better infrastructure, adopting bicycle-friendly policies and educating the general public about best practices.

The pandemic has especially increased this awareness — though California has long been a top state for cyclists, rising from 19th place in 2013 to its current spot at number four — because so many people adopted a lifestyle that prioritized life with a bicycle.

When it comes to cycling, which is a way of life for many around here, these are a few reasons why California ranks so high.

California has some of the most bike-friendly cities in the nation, putting the state near the top of the national list. This year’s report card gave California a B- for its focus on infrastructure and funding, which has seen impressive increases over the last decade.

In 2018, California was one of the top states in increases for infrastructure funding, according to the league, which said “Caltrans has had an open and productive engagement with active transportation in recent years.”

Six years ago, the State Smart Transportation Initiative, commissioned by Gov. Jerry Brown, pointed out a plethora of improvements needed in the bicycle infrastructure and planning, which included supporting legislation to end “the archaic practice of imposing state rules on local streets for bicycle facilities.” That came to fruition in the Protected Bikeways Act of 2014, which resulted in even more protected bike lanes across the state. That effort has only increased since then.

In 2015, the Caltrans Strategic Management Plan called for increasing bicycle trips and working toward reducing the number of fatal bicycle accidents over the next five years. Two years later, California adopted its first statewide plan dedicated to cycling and pedestrians.

California is at the top of the class when it comes to applicable cycling laws. The state earned an A in this category.

While the state doesn’t have any statewide vulnerable road user laws — which increase a civil penalty for drivers at fault in a bicycle accident — on the books right now, many California cities and counties are adopting their own. This has elevated the conversation about vulnerable road user laws, which may find their way into the state legislature soon. A handful of other states in the West have already done so.

California does have other laws, however, that helped it earn the top grade. For example, a state law protects young people by requiring anybody under the age of 18 to wear a helmet while riding.

The state also has a safe passing law, which requires a vehicle driver to allow three feet around a bicycle that’s traveling in the same direction as the car on a highway.

Teaching bicycle safety isn’t just important for cyclists, it’s also important for drivers who have to share the road, especially in a state where so many people are commuting on two wheels.

The California driver’s manual, which is used to prepare people for earning their license, is a vital piece of education across the state. It includes information about bike lanes and laws that apply to cyclists so that drivers can be aware.

For cyclists, there are a variety of ways to become involved in the cycling community and become a better rider. In San Francisco, the local bicycle coalition offers free educational classes for beginners and advanced cyclists alike.

California earned a B on the education section of this year’s report card — which also sought out examples of advocacy and a statewide conference for cyclists.

Even near the top of the list, there is still room for improvement in the sunshine state.

“California has made significant advances in bicycle policy in recent years, but those advances must be institutionalized more thoroughly in local Caltrans offices and in funding decisions made by Caltrans and the state legislature,” the league wrote in its California report card.

Among the improvements the league recommended is closing the $2 billion gap in funding to meet the demand for biking and walking investments. This is an issue seen across the country, however.

“Nationwide, our analysis of Fiscal Management Information System data shows that $2.87 of federal transportation funding per person is spent on bicycling and walking projects. (Fiscal) data does not, and cannot, distinguish between spending on biking and walking,” the report said. “For this reason, (fiscal) data likely over-estimates the amount of federal funding for bicycling.”

California comes in at under the national average, spending about $2.08 per person, according to the league.

Comparatively, England spends about $5.28 per person on bicycling, and the Netherlands spends an impressive $29.48 per person.

The report also points to some lacking community engagement in California and how that results in outdated design standards that are imposed on local projects. “Caltrans should work to improve its community engagement and design standards so that it can more effectively implement cultural change for safe streets and encourage more biking and walking,” the report said.