What Every Cyclist Should Know About Carbon Fiber Bicycles 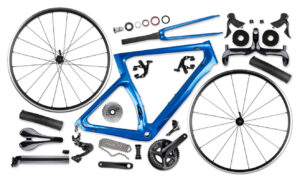 When it comes to picking a bike frame, there are a lot of considerations. Strength and weight are among them, especially if you’re riding every day. But it’s important to look beyond those factors and examine the materials themselves and how they fare with day-to-day wear and after crashes.

While popular among some bicycle manufacturers, there are some warnings that come alongside carbon fiber frames because they can be so rigid.

Carbon fiber can be described as reinforced plastic. It’s strong — when made right, stronger than steel — and requires an entire process to create.

“​​Carbon fiber is made by processing a polymer into strings or filaments of carbon atoms that measure 5-10 microns in diameter. Thousands of these filaments are combined to form a tow or ribbon. Tows are bonded together with an epoxy resin. The carbon and resin material is called a composite. Composites are layered into a laminate,” explains bike blog Where the Road Forks.

To understand why the material has some drawbacks, you have to understand that resin is used to keep the fibers, which by themselves can actually be quite brittle, together, but also to absorb some impact.

Once the material is created, it’s shaped into a bike frame. Carbon fiber came onto the bike scene about a decade after it was created for an airplane in the 1960s, and it has dominated the racing world in particular because carbon fiber bicycles are lighter than most everything else on the market. Those impressive designs have trickled down into road and mountain bikes, too.

There has been a growing concern about how carbon fiber is developed, whether it holds up well to the conditions bikes are often in, and the lack of education around safety of carbon fiber frames.

Some attorneys and experts have even come to specialize in carbon fiber cases because of the frequency of failed parts. Riders have reported pieces of bike frames shattering completely during a ride while others have described cracks or breaks that create dangerous conditions or safety issues.

For your safety, it’s important to note activities that may contribute to such failures and, even more importantly, alerting the proper channels when you encounter a failure that may not be based on an accident, because it could be a bigger problem. Some research has indicated that regions where roads are salted in the winter can contribute to more wear on a carbon fiber bicycle than other materials.

A lot of testing goes into carbon fiber development, but — like other materials — that doesn’t mean it’s foolproof.

“There’s an old saying in bike manufacturing: It can be lightweight, durable, or cheap—pick two. A lot of these carbon-fiber components are lightweight and cheap, but they are not durable,” former bike engineer Luke Elrath told Outside Magazine in 2018.

He said that when he joined Trek, a bicycle manufacturer, in 2012, he started noticing that the company was getting more and more calls about bicycle components made of carbon fiber that were failing, though several bicycle brands use the material and maintain that carbon fiber is as safe a frame option as steel and aluminum.

“Engineers use sophisticated software programs that take into account the grade of carbon, the resin, the shape, size and orientation of the carbon-fiber ply, and even where it’s located in the mold,” explains Bicycling magazine. “That’s how frames are optimized for extreme lightness or rigidity, or both…”

It’s also the reason this material can become so dangerous when not in prime condition, bicycle engineers say. Potential failure is a lot less obvious in carbon fiber materials. Cracks, wear or other defects that may lead one to believe a bike is no longer safe to ride don’t show as much as they would in steel or aluminum. A coat of paint often covers carbon fiber, making it even more deceiving.

Your bike may look fine after a crash, but experts warn that might not be the case. It’s possible that you don’t even see the effects of the crash until later down the road when a compromised piece finally gives in under the impact of a pothole or just the weight of the person riding the bike.

When carbon fiber breaks, it often fails much worse than other materials. Where aluminum might bend or crumple up, carbon fiber has the potential to shatter because of the resin and fragile fibers.

That doesn’t mean, however, a carbon frame can’t be repaired.

For many, the lack of understanding around the material creates the biggest hazard. Knowing how carbon fiber is made and how it differs from steel and aluminum frames can create some protection.

Be extra vigilant about checking your bike for wear and potential failure of parts. After a crash, assume that your frame has been compromised until you are sure it has not been. That means taking it to an expert for an assessment before riding it again.

And yes, like aluminum and steel, carbon fiber can be repaired.

“The process isn’t much different (from other materials): The damaged section is cut out and then bridged with new material that’s cured, sanded, and painted to match,” says Bicycling Magazine. “With the most expert carbon repairs, you may not even be able to see the affected portion.”

You’ll also want to check with the bike’s manufacturer. There may be a specific process or they might recommend a trusted third-party that can address any problems.

“It’s completely reasonable for someone who wants a lightweight bike to look at carbon fiber, but they need to understand the risks,” he told Outside Magazine. “Absolutely this is getting ignored.”