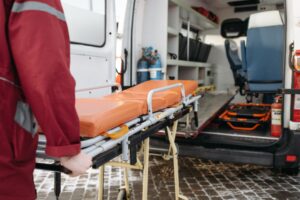 At Bay Area Bicycle Law, we use the word “crash” or “collision” rather than “accident” when speaking about our client’s cases. The word “accident” implies that no one is at fault – and for the clients we represent, this isn’t the case. These bicyclists’ lives were turned upside down because of the carelessness – or worse – of a driver.

Even though it is auto drivers’ responsibility to follow traffic laws and keep a lookout for cyclists, it is still a good idea for bicyclists to know the most common things cars do wrong to cause crashes. Better to avoid a crash in the first place than to be in a crash but be able to prove you weren’t the one who caused it. The following categories of crashes are ones that we see routinely in our work as bicycle accident lawyers in the San Francisco Bay Area.

One of the most common type of crashes are caused by cars making a right turn into a cyclist passing them on their right.

In some cases, right hooks occur when an oblivious driver passes a cyclist and then turns right in front of them. The best way to prevent this type of crash is to control the lane so that cars are more likely to wait until you pass the intersection to make their right turn.

Right hook bicycle crashes also happen when a bicycle passes a car to the right, and then ends up in a driver’s blind spot as the driver makes a right turn. If you are going to pass a car to their right as you approach an intersection, keep an eye out for turn signals or other indications that a car will turn right – like the driver looking over their shoulder. If a driver makes a sudden right turn, however, there may be no way for you to foresee the crash.

The most deadly right hook cases involve large vehicles. Understanding the characteristics of large vehicles and the limitations for their drivers can help you avoid these collisions. Large vehicles, such as semi-trucks, must make wide turns. Therefore, they may be on the far left side of their lane and appear as if they intend to proceed straight when in fact they are preparing to make a right turn.

Additionally, trucks have large blind spots along the sides and front of their high cabs. Keep this in mind and be particularly cautious when along side the cab of a semi-truck.

The “left cross” is another common type of bicycle crash, particularly in urban areas. This type of crash occurs when a vehicle passing to the left of a bicycle screens it – making it impossible to see – for vehicles traveling in the opposite direction that are waiting to make a left turn. The driver waiting to make the left turn waits for the motor vehicle to pass, then makes their turn directly into the more slowly-moving bicycle.

Again, controlling the lane is the best way to avoid this type of crash. Moving to the left and not allowing room for cars to pass you in your lane will make you more likely to be seen by a car waiting to make a left turn across your path of travel.

Also, be aware that if the sun is at your back, it is in the eyes of left-turning drivers. When possible, making eye contact with the driver can be a good way to tell if they see you.

“Dooring” crashes occur when a driver or passenger opens a car door directly into the path of a bicyclist. The bicyclist doesn’t have enough time to brake or turn, and ends up slamming into the door. Dooring crashes are especially common with rideshares like Uber and Lyft, where passengers may be let out of vehicles in unsafe locations – like directly into a bicycle lane.

Many urban riders will be doored at one point. While some riders are lucky to walk away with only scrapes and bruises, we have also seen these crashes end in traumatic brain injuries (TBIs) and fatalities. Cyclists can be killed by striking the door itself, but more commonly the serious injuries occur when the cyclist is thrown into the road and run over.

The person opening the door is generally at fault for a dooring crash. California Vehicle Code section 22517 specifically prohibits people from opening a door into a traffic lane (including a bicycle lane) unless it is safe to do so. In cases involving ride shares, it can also be the driver’s fault for letting out their passenger in an unsafe location.