PTSD After A Bike Accident 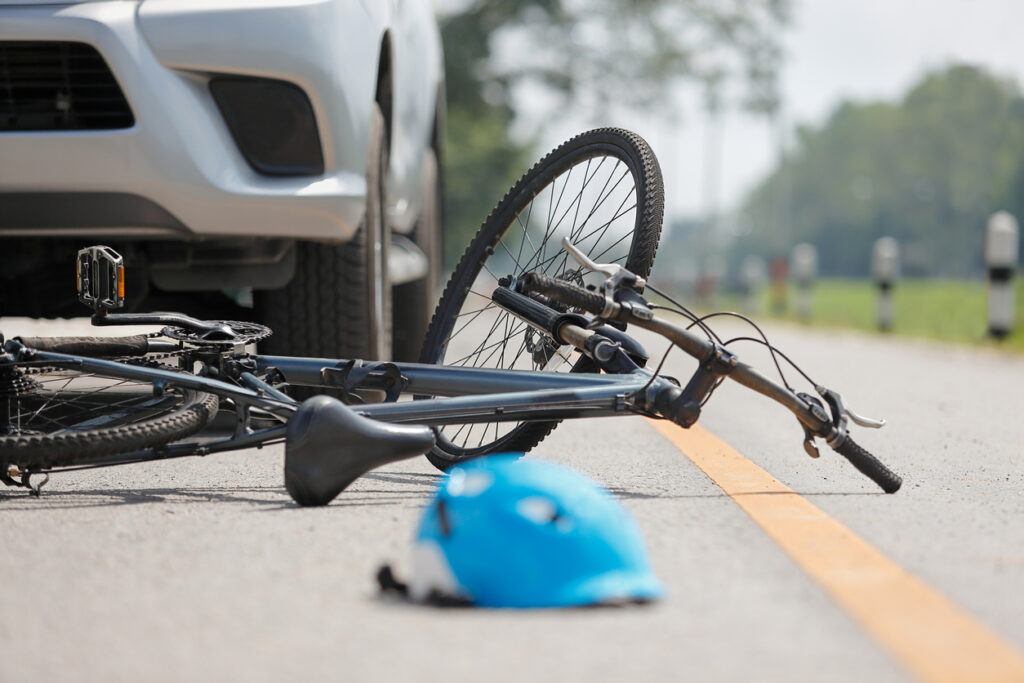 A bike crash can be an incredibly traumatic event. Even after any physical injuries have healed, post-traumatic stress disorder (PTSD) can continue to affect a cyclist. While many people may associate PTSD primarily with combat veterans or survivors of sexual assault, it is also very common for survivors of traffic accidents. One study found that nearly 40% of motor vehicle accident victims suffered from PTSD. Although we weren’t able to find statistics related specifically to bicycle crashes, it stands to reason that bicycle accident victims would have similar, or even higher, rates of PTSD.

PTSD after a bicycle accident can be particularly devastating for someone to whom cycling is a major part of their lifestyle, whether as a primary means of transportation, as a healthy form of exercise, or simply as a joyful pursuit. Beyond keeping a rider off their bike, PTSD can afflict a sufferer in all aspects of their life. PTSD is a diagnosable disorder and, once identified, can be treated. If you’ve been through the trauma of a bike crash, be vigilant for the signs and symptoms of PTSD. If you are having trouble coping with the aftermath of a traumatic bike crash, seek help right away.

The National Institute of Mental Health (NIMH) defines post-traumatic stress disorder as “a disorder that develops in some people who have experienced a shocking, scary, or dangerous event.” PTSD calls to mind for many the image of soldiers home from war, but the truth is that any traumatic event, like a bike crash, can trigger the onset of PTSD. A fear response after a bike crash is normal and the body’s reaction in the days after can take a variety of different forms. But if feelings of fright or stress persist when the body is not in danger, PTSD is likely the cause.

The Mayo Clinic says that “symptoms may start within one month of a traumatic event, but sometimes symptoms may not appear until years after the event.” According to NIMH, a psychiatrist or psychologist can diagnose PTSD in an adult after a bike crash if they have all of the following symptoms for at least one month:

●    At least one re-experiencing symptom

●    At least one avoidance symptom

Know the Signs and Symptoms

Avoidance symptoms take the form of avoiding places, objects, and situations that may remind a person of their traumatic event. For a bike rider experiencing PTSD after a bike crash, this could mean avoiding road cycling, taking a different or longer route, or, worse, not wanting to ride a bike at all. Avoidance symptoms can also be related to avoiding the thoughts and feelings related to a traumatic event. There are innumerable ways that avoidance symptoms can adversely affect one’s day to day life. If, for example, a cyclist experienced a crash during their commute, the impact could be very disruptive to their work or livelihood.

Cognition and mood symptoms make someone with PTSD feel alone and detached. If you’ve lost interest in formerly enjoyable activities after a crash, like riding your bike, this can be a symptom of PTSD. Negative feelings about oneself or others and feelings of guilt are other cognition and mood symptoms that could be experienced because of PTSD after a bike crash. Like with arousal and reactivity symptoms, these symptoms are constant, rather than triggered by a particular situation or memory.

It is normal to experience all of these symptoms after a traumatic event like a bike crash and no one should expect to be okay immediately after trauma. Many people will be able to care for themselves and cope with their trauma given time. But if these symptoms persist beyond a month, that can be a sign of post-traumatic stress disorder. About 6% of the U.S. population will experience PTSD at some point in their lives, so it’s far from uncommon.

PTSD is treatable once it has been identified. So don’t put off seeking help from a mental health professional. If ignored, PTSD can last for years. In our work as bicycle accident attorneys, we unfortunately often see clients who have suffered for years and not sought help.

If you’re having trouble finding a mental health professional or don’t know where to start, begin by contacting your primary care physician and asking for a referral. And if you experience any suicidal thoughts, immediately call the National Suicide Prevention Lifeline at 1-800-273-TALK (1-800-273-8255) to reach a trained counselor.

Additionally, if your PTSD is related to a bike crash, you may need the help of a bicycle accident lawyer in order to get compensated for treatment related to the PTSD, and any loss of wages associated with it.

PTSD after a bike crash can be treated with therapy and/or medication, depending on the needs of the patient. Each case of PTSD is different, so treatment is tailored to the individual. It’s important not to attempt to self-medicate as a treatment for PTSD, as substance abuse can exacerbate PTSD and is in fact commonly linked to it.

Common types of therapy used to address PTSD are cognitive behavioral therapy (CBT), exposure therapy, and cognitive restructuring. The goals of these therapies is to help make sense of the trauma, educate about the symptoms of PTSD, and give tools to manage through it. A specific goal, like getting back onto a bike and riding confidently without feelings of fear or stress, can be worked toward with therapy.

If your life is being negatively impacted by PTSD after a bike crash, there’s hope and help available.