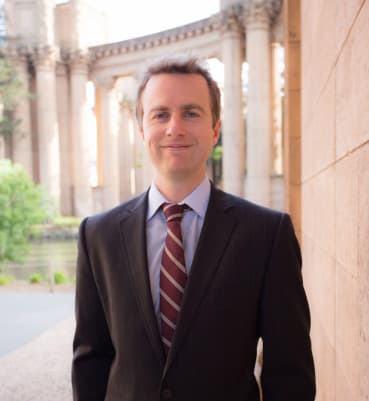 Michael Stephenson, founder and Senior Attorney at Bay Area Bicycle Law, is a member of the National Trial Lawyers’ prestigious “Top 40 Under 40,” of the “Million Dollar Advocates Forum,” and of “Lawyers of Distinction” (which limits its membership to the top 10% of attorneys in the United States). He began his career trying misdemeanor cases in Oregon as a public defender in 2007. Mr. Stephenson’s legal skills have been praised in open court by both state and federal judges, by opposing lawyers, and, of course, by his clients and their families. He is himself a skilled cyclist and is an expert at proving liability and damages in cases where a cyclist has been injured. In his spare time, he volunteers as a legal counsel for bicycle advocacy groups in California, including California Bicycle Coalition, San Francisco Bicycle Coalition, and others.

Prior to founding Bay Area Bicycle Law, Mr. Stephenson worked for Davis Wright Tremaine (DWT), one of the top 100 law firms in the United States, at its Portland, Oregon office. During his time at DWT, he worked on many high-profile lawsuits involving some of the largest companies in the United States. He left DWT in January of 2010 to return to the San Francisco Bay Area and work exclusively on behalf of cyclists.

In law school, Mr. Stephenson was awarded “Most Outstanding Trial Advocate” at the American Trial Lawyers Association’s (now The American Association for Justice) West Coast Regional Trial Championships. He graduated top of his class with Honors at the University of Oregon Law School and was a Managing Editor of the Law Review. During law school he was also an extern for the Honorable Ann Aiken, the Chief Federal Judge of the United States District Court for the Oregon District Federal Court. Mr. Stephenson was awarded the law school’s “Pro Bono Award” in recognition of his substantial volunteer legal work in defending low-income clients in hearings and jury trials in state court. Mr. Stephenson earned his Bachelor’s degree in three years at Brown University, Rhode Island.