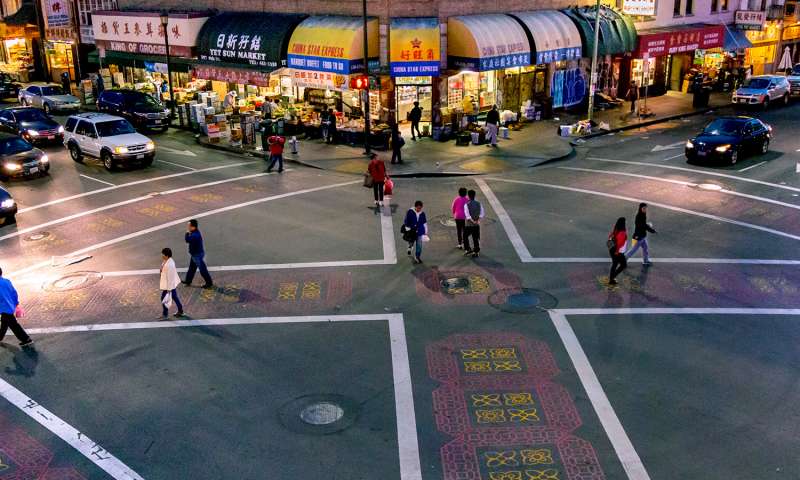 In a 2019 survey, the majority of Oaklanders — across all genders, ethnicities and races — said they believe that their neighborhoods would be better places if more people rode bicycles, and nearly 60% said they’d like to bike more than they already do.

That reality is in the works on the streets of Central Chinatown where a $500,000 grant will fund a multi-lingual outreach program to survey residents about the 15-block zone of several one-way streets. For many of the city’s cyclists and local pedestrians, it’s currently not an ideal commute. And for the people living there, new infrastructure for bikers and pedestrians comes with questions and much hope for possible solutions.

The rate of collisions in the neighborhood is high. According to bike crash statistics,  71 bicycle collisions were recorded between 2015 and 2019. In the same time period, there were more than 130 pedestrian-involved accidents. Those numbers make Chinatown one of the more dangerous areas in the city to navigate. Nearly 30% of streets in majority Asian census tracts are included in the city’s High Injury Network.

Across the city, disparity in crashes exists too. Black Oaklanders are two times as likely to be killed in a traffic collision and three times as likely to be killed as a pedestrian. City government has been working over the last several years on a series of policies to reduce those disparities, like reducing the speed limit in school zones to 15 miles per hour and implementing plans and programs to help improve roadways for pedestrians and cyclists.

In Chinatown, it’s estimated that almost 40% of residents don’t have access to a vehicle, so public transit and infrastructure for pedestrians and cyclists has become even more crucial.

The neighborhood is also much older with around 40% of residents over the age of 60. The combination of demographics creates a challenge for re-designing the street system to make it safer for everyone.

“They (the older residents) cannot walk for more than, like, three or four blocks,” Charlie Quach, owner of the Hoan Cau herbal company on Ninth Street, told Oakland North news this past fall. “You know they are fragile…their bodies, their knees, their bones.”

Older Oaklanders are twice as likely to be involved in a pedestrian collision, according to the city’s department of transportation. Already, two people, on average, from all age demographics, are injured or killed in crashes on Oakland’s streets. That is disproportionately higher in predominantly low-income areas where people of color live.

Major changes to local streets will have to factor in a number of different needs because Chinatown is a high-traffic area, residents increasingly rely on transportation other than vehicles and the neighborhood comprises retail businesses that were hit hard early on by the pandemic. Helping businesses thrive will be another necessity of new infrastructure.

Findings from the survey are expected this year, but some street design enhancements are already underway thanks to the Oakland 7th Street Connection — which will create new pedestrian pathways that connect West Oakland with Alameda and Chinatown — and the Oakland Alameda Access Project, aimed at calming a traffic coming through the neighborhood between the interstate and tunnels.

Those projects are slated to be good for cyclists in the area. For the most part, Oaklanders say aggressive drivers are among their biggest worries when it comes to riding their bike. 79% of people surveyed said it was a major problem. 68% said they worried about getting into an accident while riding their bike.

More broadly, the city is on a mission to improve commuting for the city’s bikers, particularly as cost of living increases and low-income and communities of color feel the brunt of those changes in other parts of the city.

“The investment of bike infrastructure in East Oakland is happening as housing unaffordability continues to put pressure on Oaklanders. We heard some Oaklanders voice concerns that investments in bike lanes will contribute to displacement, gentrification, and housing unaffordability,” the city wrote in its 2019 Bike Plan. “We also heard that improved bike networks can help reduce transportation costs as cost of living in Oakland increases. This plan attempts to be sensitive to these concerns and to promote a transparent and collaborative decision making process.”

The city would like to see overall cycling double, from 5% of all residents to 10% by creating access to low-stress bikeways for nearly all Oaklanders, including more disadvantaged residents. That means creating better pathways and building them so people can get to their jobs, schools, shops, transit stops and other destinations.

According to the city’s department of economic development, only 6% of the city’s population within disadvantaged communities “have access to grocery stores within a 10-minute ride on low-stress bikeways.” Neighborhoods like Chinatown and places in East Oakland would see major benefits from new pathways and bike infrastructure.

The city has identified areas, like Chinatown, where upgrades and re-design could mean a bevy of benefits for residents who are traditionally underserved, and while progress inches along, city planners say they’ve already has some success in updating infrastructure.

Since 2007, the city’s bicycle network has grown by nearly 58%, from 104 miles of pathways to 164 miles across the city, and the number of parking spaces for bicycles have tripled.

However, the city’s 2019 plan still found that pathways for cyclists are largely disconnected and that leads to a stressful experience for many cyclists, especially in underserved areas where crossing busy roads is more common.

“Most of Oakland’s low stress routes are in Downtown, North Oakland/Adams Point, and West Oakland. Around 2% of streets in Central/East Oakland are low stress bikeways, compared to 25% of Downtown streets,” according to the report.

For many of the city’s cyclists who want to ride more, it could be more projects like the one in Chinatown that make the biggest difference.