Is It Legal to Wear Headphones When Riding Your Bicycle? 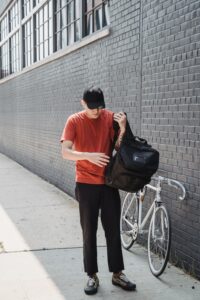 When you head out for a jog it is common to throw on a pair of ear buds or headphones and hook them up to a mobile device to listen to music, phone calls, or other things. Some companies, such as Apple, even have devices and cases designed to use when participating in sports. Nike and other companies make apps that will advise you how your workout is going. So, it would only make sense that people who do their exercise on a bicycle would want to use the same technology, right?

While it may seem to be like a good idea, if you think about it, is it really safe? Perhaps there are even laws about riding your bicycle while wearing headphone or earbuds. A common belief is that a cyclist wearing headphones listening to music or an app of some kind is a dangerous rider who can not pay attention to his or her surroundings.

Bicyclists and Headphones; Is it Really an Issue?

Some experts argue that cyclists should never depend entirely on their hearing to avoid being in an accident. For example, when you make a turn, do you depend on your hearing or your eye sight? The answer is that you should use both. Open air headphones don’t form a seal around the ear and may still leave a rider able to hear outside noises.

Other people argue that wearing ear buds or headphones while riding a bicycle is never a good idea. These opponents say that wearing headphones prevents the cyclist from hearing the sounds of traffic, as well as sounds that might warn them if their bicycle is malfunctioning. These experts argue that permanent hearing loss can develop at 85 decibels, a level much lower than the maximum sound level that many mobile devices can produce.

What Does the Law Say About Headphones and Bicycling?

There is no law that says deaf people can not ride a bicycle, so does hearing really play a role in riding a bicycle and how safe it is? Regardless of what your own views of wearing headphones may be, the law does have an opinion about the situation.

The California Vehicle Code has stated for years that it is against the law to wear covering like a headset, earphones, or earplugs that are in, inserted in the ears, or resting on both ears while driving a bicycle or motor vehicle. The law specifies that a fine up to $160 may be given to those who violate the law. So, if you feel safe doing so and want to listen to music or a podcast while riding, just make sure that you have one ear without a headset covering it or earphone in it.

If you have been in a bicycle accident, it is important to contact an experienced bicycle accident attorney as quickly as possible. If you were wearing headphones during the accident, that could be used against you to prove that you were at least partially responsible for the accident. The bike crash attorneys at Bay Area Bicycle Law will work to ensure that your rights are protected and help you get the compensation that you deserve. Contact us today to schedule a consultation.