Invalidated Pain? It Could Lead to Increased Depression 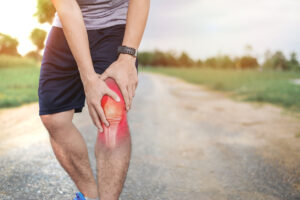 The physical pain resulting from a cycling injury can be excruciating —  road rash, head trauma, and even broken bones that can take months to mend — but having that pain shrugged off can lead to even bigger problems.

New research reveals that people who’ve felt that their pain is invalidated by the people around them run a greater risk of depression. It’s enough to deal with the pain of an accident. Adding a layer of dismissal can make the experience even worse.

“Pain is an often invisible affliction with neither an obvious outward expression nor a unifying underlying pathology that together with its subjective nature makes it difficult to be supported and/or understood by social circles and healthcare providers alike,” write the authors of the 2021 study published in Frontiers in Psychology. “Lay people, nurses, and doctors frequently think that others are experiencing less severe pain than they report, or sometimes do not believe they are in pain at all, thus discounting their pain and invalidating their experience.”

You may be donning a cast or nasty scrape, but that doesn’t mean the people around you understand the full extent of what you’re feeling. That invalidation could lead to further injury, chronic pain and ultimately not getting the help one needs.

Stories of invalidated pain aren’t new, but this study by researchers at Texas A&M University is the first to link those experiences to a heightened risk of depression symptoms, which include feeling anxious, withdrawn, irritable and excess exhaustion.

Participants in the study were asked to recount the frequency of pain invalidation from people in their lives, including family members and doctors, and their feelings of internalized shame and depressive symptoms, because shame is often recognized as a precursor for depression.

Researchers found the two were linked, and, more specifically, “pain invalidation from family was most closely tied to shame and depression.” These findings could lead to even more research about how pain and depression are linked.

Nearly all participants said they had experienced pain invalidation to some degree, which isn’t all that surprising. You may have experienced it after a cycling crash. Pain varies by person and by incident, so one person’s fractured clavicle may be very different from another. You might end up feeling shame that you feel your pain is worse, even if you find it nearly intolerable.

And because of that invalidation, you may have even downplayed your own pain to yourself and the people around you.

It’s important to be honest about your pain

In terms of bicycle accident injuries, especially when you are working with a personal injury attorney, it’s important to be candid about your feelings, mental and physical, after a crash.

Doctors warn that ignoring or downplaying physical pain in the short term could lead to more health problems down the road, and that could mean more and bigger medical bills later on, too. This has been proven in several instances, especially among female medical patients, patients of color and young people.

In the Texas A&M study, researchers said pain invalidation and its role in depression all seemed to trend in the same direction regardless of gender or race. In the end, participants with invalidated pain were more likely to feel unworthy of empathy or support and fail to communicate their needs.

“This in turn may cause the person suffering from pain to question their own subjective state and their value as a human, creating feelings of shame, and inadequacy,” researchers wrote. “Doubting one’s self-worth while still experiencing pain that others do not believe may culminate in depressive states. This is particularly concerning considering the facilitating role of depression in the transition of acute pain to chronic pain.”

Injuries from bike crashes are downplayed

Cycling accidents themselves are often downplayed. California traffic officials admit that, like the rest of the country, bike-involved accidents are underreported across the state. Deaths are the only clear statistical indicator because they are nearly always reported. It’s impossible to know how many non-fatal accidents — including those that still result in needing medical care — are happening in any given community.

As a result, it’s hard to make positive changes in community infrastructure and to collect data on how widespread cyclists are affected. It’s difficult to dedicate resources to a group of people there is no statistical data for.

That lack of support is also felt more intimately after a cycling crash occurs, making the problem one for injured people and the community around them.

“While pain is subjective and felt only by the person experiencing it, the expression and communication of pain exist to enable the person suffering from pain to receive aid,” researchers said. “Social support (or lack thereof as observed in pain invalidation) is known to contribute to the overall experience of pain, but the specific psychosocial mechanisms through which this occurs are still being uncovered.”

For cyclists dealing with an injury and pain, it’s important to seek out people you trust, whether that be a medical professional, friend or even a fellow cyclist (injury support groups for cyclists exist all over the country and online), to talk about your experience or pain.

That may encourage you to seek out the resources you need to heal.

“Broader cultural understanding about the subjective nature of pain and the importance of social support for those experiencing pain may protect against the mutually reinforcing depression-pain cycle,” researchers said. “Ultimately, invalidation of one’s internal pain experience may foment shame through self-doubt, self-criticism, and social withdrawal that drives the established link between invalidation and depression. Addressing feelings of shame and validating subjective pain experiences may decrease the burden of depression in the context of pain.”

Despite the fact that we at Bay Area Bicycle Law rarely ever encounter clients who exaggerate their injuries (as compared with their medical records), many people believe that a significant portion of plaintiffs do exaggerate or fabricate their injuries. Big business interests and their insurers have put a great deal of money and effort into spreading this belief, in order to save themselves money. On a regular basis, we see our client’s pain dismissed or downplayed because of the fact that they are seeking compensation .

In truth, our adversarial legal system — which pits defense attorneys against plaintiffs attorneys — makes it extremely difficult to get any settlement money for injuries that aren’t well-documented in medical records. And there is absolutely no shame in standing up for yourself and seeking the compensation you are owed if someone injures you.