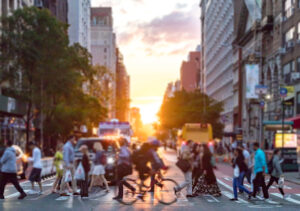 Part of being a cyclist is always scanning for dangers on the road, whether it’s a distracted driver, busy intersection or a narrow, crowded street. Even in the most ideal of situations, there is still some safety risk to cycling — just like there is to driving a car — but researchers have learned a great deal in the last few decades about what measures actually make biking safer.

Some of it is personal responsibility, but a lot of it has to do with awareness, infrastructure and the number of people who decide to ride bicycles in their community. Before the pandemic, bicycle accidents made up about 2.3% of all traffic fatalities, and most of those happened in urban areas.

The pandemic didn’t seem to curb those numbers. In 2020, despite a significant decrease in traffic here in California and across the nation, an estimated 675 cyclists were killed in accidents. 110 of them happened in California. It’s largely unknown how many non-fatal bike accidents happen each year, because they are severely underreported.

However, most everyone can agree, either through data or anecdotally, that being on a bicycle in the city can be nerve racking at best. To combat that, there are ways you can reduce your chances of a bike crash — like studying routes before riding them, being aware of surroundings and keeping up on bike maintenance — and actions traffic planners and engineers are taking to physically make roadways a better place for everybody.

It’s true. There is safety in numbers. Adding more cyclists and pedestrians to the mix is proven to make it safer for those who aren’t traveling in a car.

“Research from abroad as well as the United States finds that, although actual numbers of crashes may go up, individual risk of crashes with motor vehicles are often lower as numbers of bicyclists and pedestrians increase,” according to the National Highway Traffic Safety Administration.

This may be because there is more awareness from the general public, including drivers, who are more aware of their surroundings when they see more people on foot or bike. More cyclists also help drive policy, particularly efforts that increase safety. Bike lanes and other pedestrian infrastructure costs money and increasing numbers entices local and state governments to invest.

If you’ve ever traveled along a busy thoroughfare that doesn’t have a bike lane, you know how daunting it can be. Cars speed by, leaving hardly any space, and then there’s the threat of a person in a parked car opening a door right into you. Civic engineers know there’s a better way, and luckily, it’s taking hold more and more across the Bay area and other large metroplexes.

Better roadways not only make it easier to travel by bike, they create a safer environment for everybody on the road.

The U.S. Department of Transportation has recognized the following as mechanisms for safer roads:

To level-up your own safety, look for routes where bike lanes exist or there are trail connections. You’re more likely to have a better experience in an area where the infrastructure already exists because safety was a major consideration in that development.

Protect your head and stay visible

Helmets, however, are just one piece of the puzzle. Sporting reflective gear and properly outfitting your bike with proper lighting fixtures are also important to improving safety and reducing your risk of personal injury.

“A study of bicyclists admitted to hospitals from bicycling injuries suggested that white upper body clothing may provide a protective effect for motor vehicle collisions during daylight hours,” the NHSTA wrote in a safety report. Reflective, fluorescent or brightly-colored clothing is also recommended for daytime riding. It can better catch a driver’s attention, making them aware of your presence.

As for your bike, most states — including California — require a white light that can be seen from up to 300 feet away. Check your bike regularly to make sure that it’s working properly.

The future of safety

More than a decade ago, a dozen federal transportation officials toured a handful of European countries that place a high priority on cycling in search of the best ways to apply laws and policy to the U.S. ‘s roadways to make it safer for cyclists. There was no “silver bullet”, they concluded in an official report in 2009.

“​Instead, ​it is about changing priorities in how we address transportation demand and land use, which requires a comprehensive approach of political support, coordinated transportation and land use policies, enabling programs, adequate funding, implementation champions, competent agency staff, and clear technical guidance,” the group determined.

In short, it takes a framework of policies to create a safer environment. In most places, this framework is dubbed “complete streets” policy, and the aim is to make roads safer for every kind of user. Several municipalities around the Bay Area have already made policies or passed resolutions for complete streets, which typically include implementing:

Many of these design elements have already been identified by the federal highway administration as proven safety countermeasures and are encouraged for widespread implementation.

At the end of the day, it takes a lot of work to make roadways safer. It takes educated drivers who avoid distractions, prepared cyclists and proactive planning from communities to ensure streets are more friendly for those who choose to ride instead of drive.