How to be a Courteous Cyclist 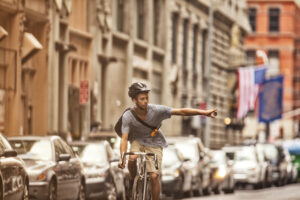 Even if you’re not a seasoned cyclist, you likely know the basic rules of the road: obey traffic signs, use infrastructure as available, etc. These laws are designed to keep road users of all kinds as safe as possible, but there’s more we can do as cyclists to make the road a better and more welcoming place.

Being a courteous cyclist is just as important as the responsibility auto drivers have when they hit the road. Even though we are  almost always at a disadvantage on the road as cyclists (except with respect to pedestrians), we still have a duty, and it is to our benefit, to act thoughtfully. As bicycle accident attorneys, we see all the time how acting courteously can not only help you to avoid a crash — but can also help the entire cycling community.

Of course, road etiquette depends on where you are, how traffic is moving and a variety of other factors, but for the most part these tips and tricks will help you do your part to keep the road safe and a fun place to be.

Go With the Flow

It’s always your best and safest bet to ride with the flow of traffic. Riding against it can be dangerous, and in most instances, illegal. But going with the flow means much more than direction.

If you’re riding in a group, be mindful of what conditions are like around you. Taking up several lanes, slowing fast-moving traffic or stopping in the road creates hazards and is frustrating for drivers, who can go on to create an even dicier scenario. Try to stay together as a group, and if the group must stop, the courteous thing to do is move off or as far to the side of the road as possible. Remember that the law says you need to ride as far to the right as practicable.

Roadways can differ greatly, even in the Bay Area. So, what works in one corridor might not in another. If a bike lane is available to you, use it. Obstructions can arise, but for the most part, utilizing available infrastructure is the most considerate thing to do.

In other situations, when you’re riding in a lane, many cycling instructors advise moving to the right of a lane when a vehicle is approaching to allow space to pass. A courteous driver should also slow down.

Stopping frequently (other than at stop signs and red lights) can create confusion or distraction to drivers. If you need to, try to move off the road. It’ll keep everybody safer.

This may seem like a no-brainer, and it sort of is. But being alert isn’t just about knowing where the cars are around you, whether they’re coming up behind you too fast or too close. Being alert is great for your safety, but it’s also helpful to those around you.

A courteous cyclist will keep a consistent distance away from curbs or the lane they are riding next to. Swerving and unpredictable movements can make it difficult for even alert drivers to focus on you and other distractions that may be around them. If your actions are sporadic, expect theirs to be, too. Watch out for any environmental or road factors, such as potholes, cracks or debris, that may impact your ability to ride in a steady manner. The more you can minimize unpredictable behavior, the better for everybody around you.

Using hand signals can help signal your attentiveness to other riders and drivers, so they know what to expect. More communication is better for everybody on the road.

When on a trail, consider a bell or giving a friendly “on your left” when approaching somebody in front of you. It’s a small gesture that improves safety and builds community.

Give Room to Those Who Need It

Seeing a car stopped in a bike lane is among one of the most frustrating sights as a cyclist, but it’s sometimes necessary for our disabled neighbors who have trouble accessing curbs.

The San Francisco Municipal Transportation Agency even developed a policy about 10 years ago that allows taxi drivers and other paratransit carriers to pull into a bike lane so that a passenger with a disability can get in or out of the vehicle.

These vehicles should have bumper stickers that alert cyclists to their purpose in the bike lane. Be patient and try to allow some space while you maneuver around them.

Whether you’re on a busy urban street, a long stretch of highway or on a trail with other cyclists, yielding is an important part of being a polite cyclist.

In some instances, such as riding on a street, this could mean simply following the traffic laws for cyclists. But if you’re around pedestrians or other cyclists, it’s good to slow down and allow space for others instead of zipping by. In the Bay Area, pedestrians have the right of way, so be mindful of those on foot. Sudden movements by pedestrians are all too common and create a dangerous situation really quickly, so it’s best to just leave some room and let them move to the side of the path before you continue on.

Additionally, if you are on a road where you cannot keep up with the speed of traffic, use any turnouts provided to allow cars to pass safely. There is never any excuse for drivers to make angry,  dangerous maneuvers around cyclists. Period. But since we as a cycling community only have control over how we act, not how drivers act, we can increase safety for the entire cycling community over time by creating or maintaining goodwill between drivers and cyclists by acting courteously.

Being seen is one of the best things you can do to help others on the road.

Plus, it’s helpful for your safety, too. Think of how many times you’ve almost been in an accident simply because a driver didn’t notice you. Everybody has a horror story (or more), but a growing body of evidence points to this simple variable as being one that can help keep everybody a bit more alert and safer on the commute.

One study even showed that wearing high-visible clothing, such as a fluorescent shirt or a reflective vest (especially in lower-light conditions), can reduce accidents by as much as 47%. That might not be the case in every community, but it could help drivers help you, making it an act of courtesy that’s almost baked into every trip.

Remember, reflectors and a front light on your bike are required by law, so you must have those.

Help Others to Help Yourself

If you ever do find yourself in the unfortunate situation of being seriously injured in a bicycle accident, following theses tips will also help your personal injury claim in a couple of ways. First, if your personal injury attorney can show that you were not only following the rules of the road, but going above and beyond to stand out and be courteous, it will help strengthen your liability arguments in settlement talks or mediations.

Additionally, if you end up in trial, jurors often have bias against cyclists. A skilled bicycle accident attorney (like those at Bay Area Bicycle Law!) will do their best to get the fairest jurors possible. But if the facts of your case show that you were being courteous as a bicyclist, you are more likely to win the respect of the jurors — and thus more likely to get them to return a verdict in your favor.