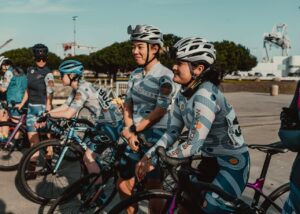 The biggest climb for women, trans, and femme cyclists in bike racing is typically the one to equality.

Long dominated by men, the sport is feverishly opening up to others, thanks in part to clubs and teams like the Bay Area’s Eclipse Racing, which was born out of SheSpoke Racing in 2015, and was created specifically to be an inclusive environment for women looking to get into all types of bike racing, from the trail to the track.

“It’s really important to be able to see what’s possible. Women haven’t had very much representation on a national stage, even while cycling more. Big WorldTour races are being televised, and there’s a lot more push toward equity, but we still need more diversity, even within that,” says Eclipse Racing captain Haley Nielsen.

Even though Nielsen had been comfortable on two wheels for years, racing didn’t seem like something she could do. She’d thought the sport was for skinny-armed men who had been cultivated to race since they were teens. That was until one day she crossed paths with the SheSpoke group on the Golden Gate Bridge and started chatting with the members. That group eventually led to Eclipse Racing’s conception and Nielsen’s love for the team sport.

From her first race, Nielsen was hooked. The sport is invigorating and challenging, but it’s the group of women — typically 20 to 25 on the team at any given time — that really makes it special.

“Our team is really all about bringing more women into bike racing, and showing folks what’s possible for them, and that your athletic career doesn’t have to be just in college, you can have that level of competition and camaraderie as an adult, and you can really take it as far as you want,” Nielsen says. “We all ride our bikes really hard and we love the physical challenge, but more importantly, we’re really good to each other and we support each other. We’re super goofy and we have a lot of fun. I think we’re the cool team.” 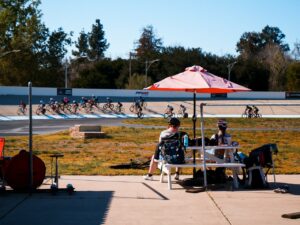 On the track, racing is all about pushing yourself and doing your best. But the team aspect can be just as important to your success.

“There’s nothing like competition where you have your team, but you also have your own job and you’re racing for your health as well as your team. It’s just really such a special sport and it sucks that it’s got a reputation for being a bunch of old guys in lycra,” Nielsen says. “I think that’s definitely changed. Especially on the competitive side. There’s still a lack of women competitors, but it’s definitely getting better.”

Pushes toward equity and equality, especially on big stages, have been sluggish in the sport’s history. 2022 marked the first time in 33 years — a whole generation — that there’s been a women’s Tour de France, the most prestigious race in the sport. And criticism of the pay gap for top athletes continues. While the average UCI men’s WorldTour team enjoys a budget of nearly $16 million, according to Bicycling, the average women’s team is only afforded a mere $200,000.

There’s hope that more changes are in store for women in the sport, especially as the pandemic reintroduced millions to bikes. The so-called “bike boom” went as far as convincing cities to extend trails, build bike lanes and even close streets to cars for the sake of cyclists.

With nearly 7 million people now more interested in bikes than before 2020, Nielsen says she hopes Eclipse can help local women make it to the race track and better the sport.

There’s also a need for more diversity within the women’s push to the top — which Eclipse is keenly aware of.

“Most of the women at the top end of the sport are all white women. They come from backgrounds of relative comfort, so there’s definitely work to be done even in that. And so, our team really tries to support anyone that wants to bike race, and not just people that have the resources to do it.”

That’s meant covering race fees and offering scholarships for cyclists — which Nielsen says is made possible by sponsorships, like the one from Bay Area Bicycle Law. Women, trans and femme cyclists are able to venture into racing through a inviting and inclusive environment, which hasn’t always existed.

“The ultimate goal is to just have fun and race hard and show people that that’s possible, and that it doesn’t have to be all about winning. It can be about the journey,” Nielsen says. “And that’s equally as important. We love to win, though. I do think that the big goal is just to increase visibility of cycling in the sport of competitive cycling to more people.”

Being located in northern California makes that even easier. The weather allows for a pretty long season, races range from January through September, and there’s even a whole month dedicated to beginners.

The Early Bird Beginner Racing Clinics run every Sunday in January and even include a mentored mock race.

“We have a really robust race scene here,” Nielsen says. “One of the strongest regional race districts in the country. At one point, every woman that was on TeamUSA came from racing in Northern California.”

Eclipse can fit in as many as 50 races in a season, making the sport a relatively easy one to jump into at any time.

“The competitive part of bike racing definitely can be intimidating,” Nielsen says. “I think once you start getting into wearing all the lycra and the kits and all of that it can get really intimidating. But there are all kinds of access points for people…You don’t have to have any experience racing or even want to continue racing at all. You can just check out what it’s all about.”

Nielsen and the Eclipse team are looking forward to a strong season beginning in 2023, full of wins, but more importantly, full of inclusivity and making women feel more comfortable in a sport they’ve always belonged.