Do bicycles have to stop at stop signs? 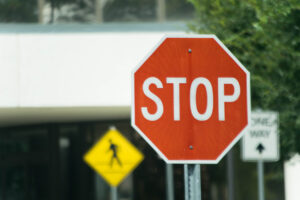 It’s an all too familiar scenario: You’re cruising on your bike through a quiet residential neighborhood and there’s no traffic. You’re scanning the street you’re about to cross, there aren’t any cars ahead, but there’s a stop sign. Should you come to a complete stop?

It’s tempting to ride on through. But in California, the law says yes, you should hit the brakes and stop.

Across the state, a bike is considered a vehicle for all traffic codes and rights-of-way and can travel in the streets alongside motor vehicles. This means that a cyclist is required to stop at a stop sign just like a motor vehicle — even if it would be safer to ride through it. Often called the “California stop”, rolling through a stop sign is prohibited by law, but other states are proving that allowing the maneuver can be helpful to cyclists and drivers alike.

Almost a dozen other states have changed their laws to allow cyclists to treat stop signs as yield signs. Their findings? It actually helps keep cyclists safer and encourages more people to hop on a bike.

Idaho, which was the first state to pass a stop-as-yield law for cyclists in the 1980s, found that after the bill was passed bicyclist injuries from traffic crashes declined by 14.5% the following year. Other states and countries have found similar results.

In 2017, Delaware adopted a law that allowed cyclists to roll through

stop signs when safe. The state found that in the 30 months after passage, traffic crashes involving cyclists at stop sign intersections fell by more than 20%.

The reason is likely because it keeps the flow of traffic moving, especially when vehicle drivers may not be paying attention to cyclists traveling alongside them. A cyclist may be able to keep moving instead of stopping and risking a car hitting them from behind.

California Gov. Gavin Newsom vetoed a bill in 2021 that would have allowed cyclists to roll through stop signs when there is no other traffic. While it had broad support from legislators across the state, Newsom said he believed the bill’s intent to keep cyclists safe would have “the opposite effect.” He wrote that the bill “may be especially concerning for children, who may not know how to judge vehicle speeds or exercise the necessary caution to yield to traffic when appropriate.”

The decision didn’t sit well with those who know how dangerous California roads can be for cyclists.

“Governor Newsom showed today he doesn’t understand the needs of people who use bikes for everyday transportation. This commonsense law would have reduced conflict between bike riders and car drivers,” Dave Snyder, Executive Director of CalBike, said following the veto. “I’m disappointed that, while climate change ravages our state, the governor blocked a popular measure that would have helped more people choose carbon-free transportation.”

Is there a penalty?

Some argue that enacting the law doesn’t really matter. Police aren’t often sticklers about enforcing the stop sign rule for vehicles, and they seem to care even less about the rule for cyclists.

A study of bicyclists in Tampa Bay, Florida, found that it is car drivers who are less compliant with traffic laws regarding bicycles. More than 87% of the time, “bicyclists highly complied with general traffic rules.”

Even so, it isn’t always the scenario that police are lenient on the California law, and breaking it could land you with a fine to the tune of a few hundred dollars. On top of that, there is the time it takes to go to court to take care of the ticket.

It is also less safe to do a rolling stop while it is illegal, than if it was legal. That’s because predictability increases safety. If drivers expect cyclists to roll through stop signs, they can plan for that. But now, some cyclists stop and some don’t – so it’s much harder for vehicle drivers to know what to expect.

Additionally, as long as it is illegal for cyclists to roll through stop signs, doing so creates ill will with drivers, who may unfairly generalize all cyclists as reckless or inconsiderate when they see a cyclist breaking a law by rolling through a stop sign. While the rolling stop law alone certainly wouldn’t eliminate all ill will toward cyclists, combined with a public education campaign about the benefits of a rolling stop, it could ease the ire.

So, while it may be loosely enforced, many cyclists want to see the legislature take up the proposed law and make rolling stops legal for cyclists.

Perhaps one of the most surprising findings states have had after passing laws to allow rolling stops is that more people hopped on a bike.

In fact, safety concerns are the leading cause of people being hesitant to bike regularly in the Bay Area and beyond. A 2019 survey in Oakland found that 45% of respondents were “interested but concerned” about cycling through the city, mostly because of having to share the road with vehicle drivers.

Laws, such as the one vetoed by Newsom, might actually play a part in getting more people to partake in cycling, making it an activity that’s safer and easier for everybody.

Involved in a crash?

If you end up in a collision because of rolling through a stop sign, it will also hurt any personal injury case you wish to bring. But whether your bicycle accident was your fault or a driver’s, you should talk to an expert about your case – particularly if you were seriously injured, including suffering a traumatic brain injury, even if it was categorized as “mild” (mTBI, mild TBI, and concussion are all terms that may be used to describe a traumatic brain injury that may have permanent effects).  Bay Area Bicycle Law works with clients all over the State of California and is one of the state’s only personal injury law firms that specializes exclusively in bicycle accidents. We handle cases in your area, and there are many benefits to working with a specialist.

Contact us today for a free consultation by email or by calling 866-bicycle-law (866-242-9253). Years of advocacy for bicycle crash victims have seasoned our attorneys with the necessary skills to handle bicycle accident cases with the utmost level of professional expertise. And as cyclist advocates, we will always offer you legal advice that is in your best interest.