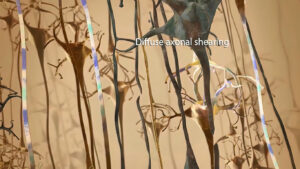 Diffuse axonal injury affects nerve fibers, which can lead to a disruption in nerve communication affecting a persons physical and cognitive abilities.

The moments during and after a bicycle crash can be frightening, especially if you’ve suffered a head strike or whiplash that might have resulted in a traumatic brain injury. After the initial shock of the incident, you may be wondering what type of medical care is necessary to determine and evaluate such an injury.

While bicycle crashes are the leading cause of sports and recreation-related traumatic brain injuries (TBIs) in American emergency rooms, according to the Center for Disease Control and Prevention, it’s not always clear what types of imaging should be ordered by the physician and how useful they are in diagnosing your injury. Afterall, brain injuries can range from a mild concussion, which aren’t always picked up on scans, to more serious issues like bleeding.

What is a traumatic brain injury?

The term TBI is a catch-all phrase that can include many different injuries.

Even though a concussion is often considered a mild TBI, you can still experience some side effects that impact your day-to-day life, especially when you’re recovering.

Signs you may have experienced a mild TBI:

More serious brain injuries can involve vomiting, severe confusion, blood or fluids coming from the nose or ears and other symptoms. Those symptoms will almost always require some kind of brain imagining, but for milder cases, it can be a bit trickier to know whether scans will reveal anything beyond what a doctor can deduce through a routine examination.

Here’s what you should know about the two options often discussed when a person is experiencing some kind of head trauma.

CT scans (computed tomography) can be really helpful for doctors to detect some bicycle injuries, but only if they pertain to muscles and bones. If you crack your skull or have a deep lesion, it’s quite possible a doctor orders a CT scan.

A CT scan uses a series of X-rays to create a 3D image of soft tissues and bones. These images also show organs and blood vessels, so it’s also possible to diagnose some diseases, like cancer, blood clots along with many injuries.

But when it comes to a mild TBI, such as a concussion, it’s not likely that a CT scan would prove to be as useful as it can be in other instances. The injury itself doesn’t show the kind of evidence a CT scan is looking for. Concussions are “caused by a bump, blow, or jolt to the head or by a hit to the body that causes the head and brain to move rapidly back and forth,” the CDC explains. “This sudden movement can cause the brain to bounce around or twist in the skull, creating chemical changes in the brain and sometimes stretching and damaging brain cells.”

Those changes to the brain might not be evident on a CT scan – which leads doctors to use the tool far less often.

“Most head injuries don’t require a CT scan. Even if you briefly passed out, a CT scan is not indicated unless you have symptoms and exam findings concerning a major head injury. Mild headache, dizziness, fatigue, irritability, and difficulty concentrating are possible after a minor head injury (post-concussion syndrome),” says the American College of Emergency Physicians.

Worsening symptoms, however, could prompt a CT scan.

Additionally, there is some risk when it comes to CT scans. Because the process uses radiation, there’s an elevated chance of developing cancer, though some studies say the increase is too small to measure effectively. It’s also possible to have an allergic reaction to the contrast agent in a CT scan.

It’s far more likely that somebody experiencing a brain injury due to a bicycle crash would receive an MRI scan, which works much differently than a CT scan.

MRI stands for “magnetic resonance imaging,” which also describes how the imaging tool works. Through powerful magnets and radio waves, a computer can generate images of the body.

MRIs can also track changes in the brain over time – which can help health care professionals to learn more about the injury or disease.

According to a study published in the Journal of Affective Disorders, MRIs following traumatic brain injury yields important prognostic information, especially those “associated with poor long-term neurocognitive and psychiatric outcomes.”

These images can help doctors see a clearer picture of the injury as well as the damage it’s caused to the brain. MRIs can also help identify the injury much sooner, making it an important tool immediately after your crash.

However, the type of MRI that you might receive at a hospital cannot rule out a TBI. While more useful than a CT scan, most MRIs still cannot detect the types of damage caused by a concussion, because they do not reveal the specific, detailed anatomy of white matter in the brain.

“White matter is found in the deeper tissues of the brain (subcortical). It contains nerve fibers (axons), which are extensions of nerve cells (neurons).” A TBI can cause damage to axons that would not be see in a normal MRI — but can be seen in a special type of MRI, called a DTI (“diffusion tensor imaging”). DTI is a particular protocol run on an especially powerful MRI machine. This type of MRI machine is almost never found in a hospital.

Even if you have CT scans or MRIs from a hospital that show no indication of a TBI, that does NOT mean that you have not suffered a TBI.

Injured cyclists are often told that concussions are not that serious, but the attorneys at Bay Area Bike Law know that is not always true. We are frequently working with clients who have experienced long-term effects from undiagnosed or under-diagnosed TBIs. Our experienced bicycle accident attorneys can help you to get the correct brain imaging to diagnose your brain injury.

When it comes to these injuries, the more you know about it early on, the better your prognosis and recovery will be — and the better for any personal injury case you may decide to bring. We want our clients to receive the best chance at returning to normal, so don’t hesitate to reach out to one of our staff attorneys who knows the kind of suffering you may be experiencing.

Brain scans can be an important part of healing and shouldn’t be an added stressor on top of recovery. It’s important that cyclists have been diagnosed with a TBI, or suspect that they suffered a TBI, access the proper testing as soon as possible.