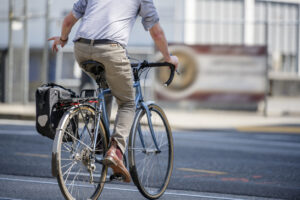 A new year brought new rules for cyclists in California. The Bicycles Omnibus Bill, which was passed in September by Gov. Gavin Newsom, went into effect Jan. 1. With it, comes some exciting and helpful safety updates.

The legislative package brings four major changes for cyclists, and proponents of the bill (AB 1909) say the enacted law will make roads safer for people on two wheels and give cyclists more rights, especially as accidents and deaths on roadways in California and across the nation grow with more people taking to bicycles for commuting, exercise and leisure.

“As a cyclist, I brought forward AB 1909 to help provide all Californians with the safe opportunity to enjoy a healthy, clean alternative mode of transportation. Decreasing barriers to bicycle ridership is imperative to achieving California’s climate goals,” bill sponsor Laura Friedman, a Los Angeles lawmaker, said of the legislation. “AB 1909 offers more route options to e-bike users and implements important safety measures for bicycles. This approach will significantly decrease the number of fatalities and injuries to cyclists, while simultaneously increasing public health and fighting climate change.”

There is a lot to like about e-bikes: they’re climate friendly, more powerful with their pedal-assisting technology and can help you zip around urban areas. E-bike popularity has soared in the Bay Area and across the state, but some cities and counties have begun limiting access.

That’s no longer the case. The OmniBike Bill opens most California bikeways to e-bikes, but still allows communities to bar them from equestrian and hiking trails.

The law amends previous law that restricts use of Class 3 e-bikes on Class 1 bikeways, which are typically described as corridors that are not served by streets and highways, and disallows local governments from regulating class 1 and 2 e-bike operation on Class 1 bikeways.

Additionally, cyclists riding conventional bicycles can operate them at speeds similar to, or faster than class 1 or 2 electric bicycles (20 miles per hour), the new law says. Class 1 bikeways often have speed limit signs, indicating the speed for the bike path.

Building on previous law, the OmniBike Bill requires vehicle drivers to completely switch lanes when feasible before passing a cyclist on a roadway, even if the cyclist is using a designated bike lane.

The Three Feet for Safety Act, passed in 2013, created some space for cyclists. The act specified that a driver shouldn’t overtake a bicycle traveling in the same direction on a highway or roadway at a distance of less than three feet. If that wasn’t possible, the law said a vehicle should slow down to a reasonable speed.

While written into law, the rule wasn’t often enforced.

“Law enforcement officials find this rule difficult to implement as officers must make a judgment call of the distance between the vehicle and the bicycle,” California policy analysts wrote last year.

Cycling safety advocates say the extra margin written into the new law will reduce near misses and collisions, as well as provide more clarity for vehicle drivers on how to react when approaching a cyclist. They’ll no longer have to judge themselves what three feet is.

“When a road user does make a mistake, there is a wider safety buffer that could reduce the chance of a serious injury,” Timothy Weisberg, a spokesperson for the California Office of Traffic Safety, told one newspaper upon implementation of the new law.

Drivers who don’t follow the law and change lanes face at least $238 in fines and fees. Injuring a cyclist comes with an even steeper fine: at least $982.

Say goodbye to bicycle licensing laws in 2023. The OmniBike Bill ends the ability for municipalities to allow the practice, which have long been hard to enforce and advocates say mostly encourage harassment of youth and cyclists of color.

“Some of these have been on the books for a long time, they’re not enforced in general, but they can be used for aggressive enforcement and create an overcriminalization for young bike riders, especially Black and Latinx youth,” Debra Kagan, executive director of the New Jersey Bike and Walk Coalition, told Bloomberg News in 2021. “There’s no documentation that licensing helps with safety. Clearly it creates a barrier for bike riding.”

This update to the law comes as more and more data shows that Black riders are more likely to be stopped than white riders, and that most stops occurred in Black neighborhoods. An analysis from Bicycling in 2020 showed that in Oakland, between 2016 and 2018, “Black riders accounted for nearly 60 percent of all police bike stops, and they were stopped more than three times as often as whites—despite representing less than a quarter of the population.”

Intersections, especially in busy areas, can be some of the scariest places for cyclists, but the OmniBike Bill will make them safer to maneuver. The new law allows cyclists to cross intersections along with pedestrians when the WALK signal — typically referred to as a “leading pedestrian interval” or LPI — is flashing.

“This tool has gained in popularity to protect the safety of pedestrians,” bill analysts said. “It allows for increased visibility of pedestrians as well as the opportunity to cross the street without being confronted by a vehicle.”

Other major cities that have implemented such a rule have seen favorable results. When New York City allowed cyclists to take advantage of the LPI, injuries to cyclists decreased by more than 26%.