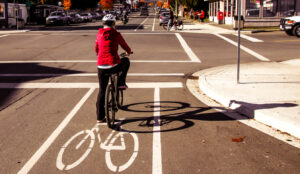 Pedaling off to work, school or for a joyride can feel so freeing. You’re able to avoid standstill traffic, costly parking fees and earn some feel-good endorphins along the way. Still, there are some rules of the road that you should follow.

California bike safety laws have been enacted to help prevent crashes and encourage confidence among riders. Knowing what’s law and what’s not can be a bit intimidating, especially as lawmakers continue to debate some safety measures and others are done at the city-level.

These five tips will help you better understand what’s law, what isn’t, and where you should go to learn more information.

For new riders especially, it can feel safer to ride on the sidewalk, but doing so could land you a ticket depending on where you are. California doesn’t have any state-wide rule on this subject, and instead leaves it up to local municipalities, so it’s a good idea to quickly check with the city or county where you’re riding.

It’s easy to check online for such rules in city code, but if you need some help, reach out to local representatives. They should be able to point you in the right direction.

Keep in mind, however, that even where riding on the sidewalk is allowed, it often is not the safest place for a cyclist. Drivers are more likely to forget to check sidewalks before turning than they are to forget to check vehicle lanes.

Nighttime can be especially dangerous for cyclists. More U.S. pedestrians and cyclists are dying in car crashes, many of them happening after dark, according to the latest data from the National Highway Traffic Safety Administration.

California law attempts to prevent such accidents by requiring cyclists riding in the dark to have:

It’s also a good idea to wear reflective clothing during night rides. This will increase the likelihood that drivers will see you. Darker clothing tends to blend into the night, and even at dusk, when there is still some light, it can be very difficult for drivers to see you if you are wearing dark clothing. A vest, jacket, or even strip of reflective tape can help make you more visible in low-light conditions.

The topic of whether cyclists need to stop at stop signs has been hotly contested in California over the last decade, and even as other states around the country ditch the requirement, it’s still the law here.

California Gov. Gavin Newsom vetoed a bill in 2021 that would have allowed cyclists to roll through stop signs when there is no other traffic. Despite having broad support from legislators from across the state, the governor said he believed the bill’s intent to keep cyclists safe on California roads would end up having the opposite effect. In his veto, he wrote that the bill “may be especially concerning for children, who may not know how to judge vehicle speeds or exercise the necessary caution to yield to traffic when appropriate.”

There’s not any indication, however, that this is the last word on the subject. Cyclist advocacy groups across the state are passionate about changing the law, especially as other states have shown that stop-as-yield laws for cyclists do increase safety.

Four: Vulnerable road user laws are local only, for now

Vulnerable road user laws are being put into effect in states and municipalities across the country in an effort to protect people who travel by foot or bike. Most often, these laws increase fines and civil liability for drivers who seriously injure pedestrians or cyclists, or who put others on the road at risk.

Nine states have enacted statewide laws, and while California is not among them, you may want to check in with the municipality where you’re riding to see if they’ve made any local laws. In the last decade, Los Angeles, Berkeley, Sunnyvale, Sebastopol and Santa Rosa have all adopted anti-harassment ordinances, which protect bikers from “intentional threats, assaults, or harassment by motorists.” This is in addition to negligence, which is essentially unintentional but careless behavior, under which most personal injury claims are brought.

For some, a podcast on the commute is a good way to pass time and for others, a carefully curated playlist can make all the difference on a ride, but if you’re going to be riding headphones while cycling, remember to be mindful of how you are listening.

There is some disagreement in the cycling community as to whether using headphones is in fact a safety issue – after all, there aren’t any laws barring deaf people from riding bicycles. While some say you should rely more on your vision than your hearing, others say all senses should be a priority when traversing the streets on two wheels.

California laws make this argument a bit easier: No matter where your opinion falls, the California Vehicle Code states that no cyclist should wear a covering like a headset, earphones, or earplugs that are in, inserted in the ears, or resting on both ears while driving a bicycle or motor vehicle. Violating this law could come with a fine of up to $160.

If you feel safe to do so, hit play, but remember to leave one ear uncovered and pay attention to your surroundings.

Even when you’re following all the rules of the road, bicycle accidents still happen. No matter who is at fault, you should reach out to an expert about your case, particularly if you’re injured.

The bike lawyers at Bay Area Bicycle Law work with clients across the state, specializing exclusively in bicycle accidents. We handle cases in your area, and there are many benefits to working with a specialist. Our bicycle crash lawyers will work to ensure that your rights as a cyclist are protected, and will help you get the compensation that you deserve. Contact us today to schedule a consultation.

Working with a specialist in bicycle accidents has many benefits. We can help you with cases in your area.